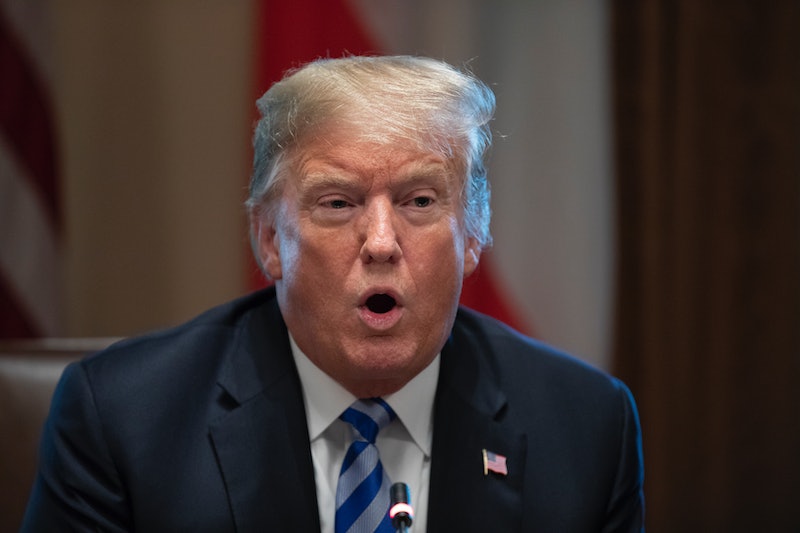 Donald Trump's presidency plays out on Twitter in a way none before have. But when it came to commemorating Sept. 11 on the social media network this year, he retweeted an assistant and added a few hashtags. Needless to say, President Trump's 9/11 commemoration on Twitter left plenty unsaid. He later praised his lawyer Rudy Giuliani, who was then mayor of New York City, largely leaving the tragedy out of his posts.

Clearly, Sept. 11 was not Trump's main focus as he started off the day on Tuesday, the 17th anniversary of the attacks. First, he posted about Russia collusion and tagged two Fox News personalities, a topic he would return to throughout the morning. Trump appears to have possibly been watching last night's Lou Dobbs Tonight on his DVR.

Then, for his second post of the day, Trump retweeted White House Social Media Director Dan Scavino Jr.'s tweet about Sept. 11 and added the hashtags #NeverForget and #September11th. Scavino's post was about the president signing a proclamation on Monday declaring Tuesday "Patriot Day 2018" in honor of the lives lost in the 2001 terrorist attacks.

About 45 minutes after the retweet — and after tackling the FBI and Department of Justice again in other tweets that mention Fox News and Lou Dobbs — Trump praised Giuliani. "Rudy Giuliani did a GREAT job as Mayor of NYC during the period of September 11th," Trump wrote. "His leadership, bravery and skill must never be forgotten. Rudy is a TRUE WARRIOR!"

The White House Twitter account also retweeted Scavino's tweet first thing in the morning. About 45 minutes later, the account followed the retweet with a visual of the flag and "Never Forget." Trump used similar visuals in his third tweet about Sept. 11, with a picture of him and the first lady heading to Shanksville, Pennsylvania, for a memorial service from one at the White House. The picture is from 2017.

The 17th anniversary of the attacks is not the first time that Trump's response has caught the public by surprise. Back in 2011, he responded to the attacks and the World Trade Center's demise by noting that his building was then the tallest in the area.

That sort of response continued through the years until last year. In 2011, for example, Trump claimed on Twitter to have predicted the attack. He wrote, "I predicted the 9/11 attack on America in my book 'The America We Deserve' and the collapse of Iraq in @TimeToGetTough."

In 2017, his first year in the White House, he posted a more somber video with the words, "May God Forever Bless the United States of America." You can see in the video clearly that this year's photo was taken then. That went up with a photo and quote from that first Sept. 11 as president. Both tweets seem to have been produced by someone else at the White House.

Last year, there were no Fox News tweets mixed in either. This year's Twitter commemoration, if nothing else, seems like it was done by Trump.