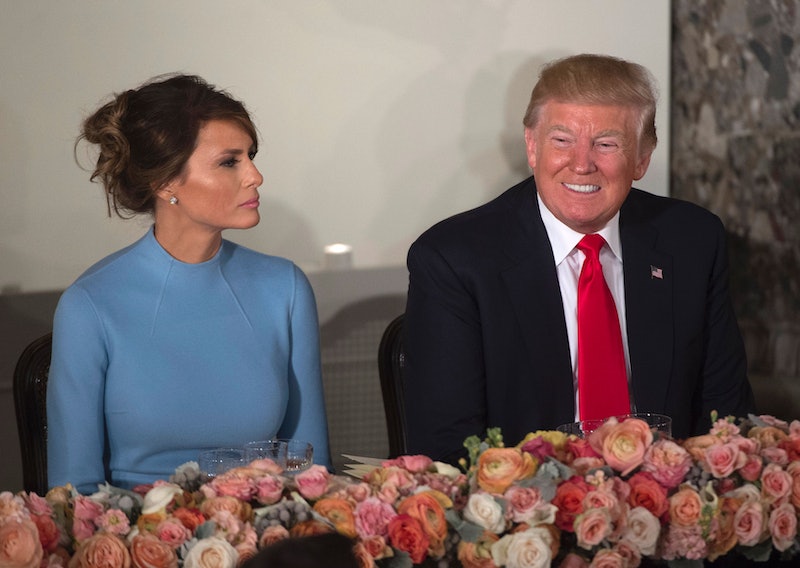 The nation just witnessed the inauguration of the 45th president of the United States of America. During his speech, Trump made a series of extravagant claims. He referred to unemployment and supposed violence as "American carnage," graphic and dramatic language that was a hallmark of this speech. Trump described his election as a "historic movement the likes of which the world has never seen," and promised "I will never ever let you down." And in case you missed any of the televised oratory, President Donald Trump just took over the @POTUS account, and President Trump's first tweet links to a Facebook post.

As an initial tweet offering, this is mercifully tame: a straightforward, appropriate picture that is a header image for a Facebook link to a transcription of Trump's inaugural speech. One can perhaps hope that as POTUS, Trump will reserve any of his regular tirades for his personal Twitter account. That being said, the content of the inaugural speech is historically singular. Trump did not just speak of his own policy views. He openly attacked his political adversaries, from both political parties, who happened to be sitting right in front of him, and who also happen to represent the many millions of Americans who did not vote exclusively for Trump.

The media has often been accused of hyperbole in how they have covered Trump, but it is difficult to overstate how dark a vision of America he painted in his inaugural speech. Rather than recognize that this is an exceptional, unique country that is the preferred destination of millions of immigrants for a reason, Trump instead said, "We’ve enriched foreign industry at the expense of American industry." He claimed, "We've defended other nations' borders while refusing to defend our own." And furthering his pessimistic vision, Trump said, "We’ve made other countries rich while the wealth, strength, and confidence of our country has disappeared over the horizon."

But many economists argue that the loss of manufacturing jobs are not the fault of globalization, but of technology. Ostensibly, Trump's claim that America no longer protects its own borders is in reference to illegal immigration, but that happens to be at a 40-year low. Certainly, there has been no Pearl Harbor, and no repeat of 9/11, under the two terms of President Obama. What, exactly, is Trump even talking about?

And as far as making other nations wealthy, Forbes ranks the United States as the wealthiest country in the world. In terms of per capita income, the U.S. comes in third, just after Switzerland and Australia. That means the average person in America makes significantly more than the average person in any other country worldwide, with the exception of two other Western countries not in any way responsible for "stealing" our manufacturing jobs.

"America will start winning again, winning like never before," said the president, just a few short hours ago. But if belonging to the wealthiest, most powerful nation in the world isn't enough to qualify as "winning," one has to ponder the ominous question: What does "winning" mean in a world led by Trump?