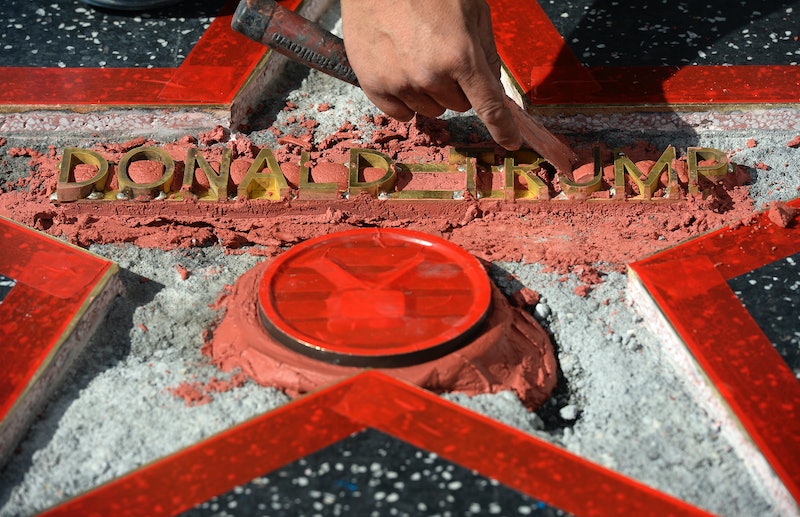 Ever since he launched his 2016 presidential bid, Donald Trump's Hollywood star has been vandalized on numerous occasions. Early Wednesday morning, Trump's star was defaced yet again, The Hill reported — this time by vandals who spray painted the words "Putin's B*tch" across the star.

According to the Los Angeles Times, a vandal approached Trump's star at approximately 3:40 a.m. on Wednesday morning and coated it with black paint before writing the phrase "Putin's B*tch" across it in white paint. Video footage obtained by TMZ appeared to show the vandal doing this, as well as another person taking photos or videos of the incident.

This latest act of vandalism on Trump's star comes days after Attorney General William Barr released a redacted version of Special Counsel Robert Mueller's Russia probe report to the public, and seems to imply that Trump has a deferential relationship with Russian President Vladimir Putin, per the New York Daily News. Trump has long denied accusations that he colluded with Russia or Putin.

The Hollywood Chamber of Commerce reportedly told the Hill that the Hollywood Property Owners Alliance sent a cleaning crew to remove the paint from Trump's star not long after the vandalism had been discovered. The Hill also reported that the Hollywood Historic Trust, which is responsible for the maintenance of all the stars along the Hollywood Walk of Fame, has filed a police report.

According to Vanity Fair, Trump was granted a Hollywood star in 2007, when he was still the host of The Apprentice. When he decided to run for president, however, his star became a popular target for vandals and artists who disagree with the Trump administration's policies.

In July 2016, a street artist constructed a miniature border wall around Trump's star, in reference to the then-Republican nominee's calls for a southern border wall paid for by Mexico. Two months later, someone crossed out Trump's name on his star and replaced it with graffiti, per Vanity Fair. Then, in October 2016 — not long after the release of the Access Hollywood tape that captured Trump having a lewd conversation about women — a man disguised as a city construction worker destroyed Trump's star with a sledgehammer, the Hill reported.

All of the vandalism during Trump's campaign led to the star being covered up to discourage vandals on Election Day 2016, Vanity Fair reported, but the attacks — and artistic commentaries — on Trump's star only escalated once he was elected. In the two years since Trump's inauguration, everything from a golden toilet to an illustration of prison bars have appeared on Trump's star. The star was also destroyed on a separate occasion with a pickax — and the man who did that was reportedly bailed out of jail by the man who initially destroyed the star with a sledgehammer, Elle reported.

In light of the #MeToo movement and the allegations of sexual misconduct made against the president — all of which he has denied — the West Hollywood City Council proposed a resolution last year to have Trump's star removed completely from the Hollywood Walk of Fame, per the Hill. The Hollywood Chamber of Commerce has said in the past that it does not remove stars because they are "part of the historic fabric of the Hollywood Walk of Fame," the LA Times reported, though the city council pointed out in its resolution that the Walk of Fame is ultimately the property of the city of Los Angeles.