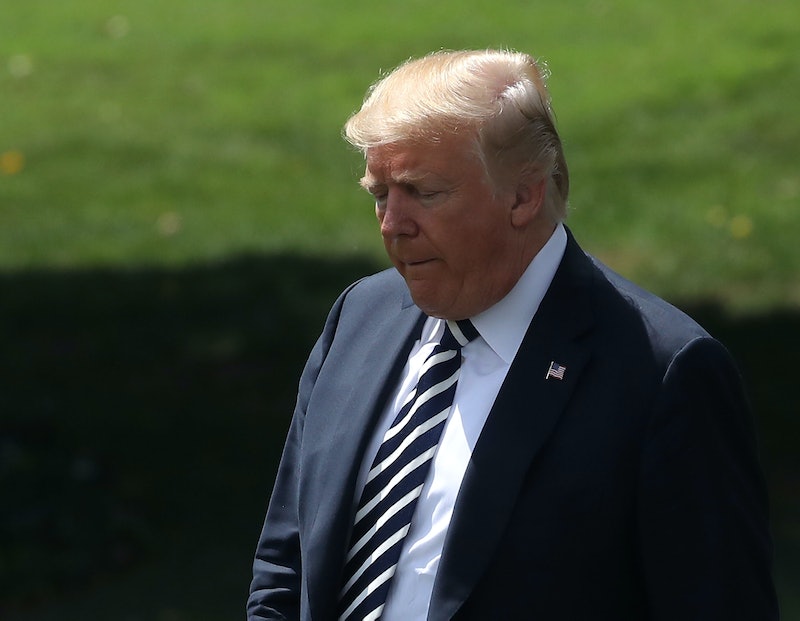 For many, Labor Day weekend is like having a second Sunday, somewhat easing the transition into cooler seasons. President Trump's Labor Day weekend plans appeared to be similarly low key. By Monday evening, the President had not so much as left the White House grounds, according to reports, though he made several appearances on Twitter.

Trump spent much of Saturday and Sunday at his golf club in Northern Virginia, according to multiple reports. While for a moment it appeared that Trump might take off to an undisclosed location, he appeared to change his mind, according to The Hill. The White House press pool gathered by their designated vehicles upon seeing the president exit the White House just before noon, but after a short while, Trump returned indoors, according to the report.

Donning a polo and white cap, he reportedly stopped only to speak with a few staffers. The pool was then dismissed for the day, per Bloomberg. White House Press Secretary Sarah Huckabee Sanders told The Hill in a statement that he opted to use the day "to make calls specifically on trade and other international issues."

The president did, however, have a presence on Twitter throughout the course of the day. Beginning very early in the morning, he wished his constituents a happy holiday.

"Happy Labor Day!" he wrote. "Our country is doing better than ever before with unemployment setting record lows. The U.S. has tremendous upside potential as we go about fixing some of the worst Trade Deals ever made by any country in the world. Big progress being made!"

Richard Trumka, the head of the AFL-CIO, represented his union poorly on television this weekend. Some of the things he said were so against the working men and women of our country, and the success of the U.S. itself, that it is easy to see why unions are doing so poorly. A Dem!

Trumka is the president of the nation's largest federation of labor unions. He has historically criticized Trump's policy initiatives, and had done so on television over the weekend.

As the day wore on, Trump retweeted his press team, and his daughter, before turning his attention to Attorney General Jeff Sessions, tweeting:

Two long running, Obama era, investigations of two very popular Republican Congressmen were brought to a well publicized charge, just ahead of the Mid-Terms, by the Jeff Sessions Justice Department. Two easy wins now in doubt because there is not enough time. Good job Jeff......

He followed up his thoughts with a second message:

The Democrats, none of whom voted for Jeff Sessions, must love him now. Same thing with Lyin’ James Comey. The Dems all hated him, wanted him out, thought he was disgusting - UNTIL I FIRED HIM! Immediately he became a wonderful man, a saint like figure in fact. Really sick!

Trump appeared to be referring to Republican congressmen Duncan Hunter and Chris Collins, both of whom were recently indicted. Trump has been particularly vocal in criticizing the AG lately, and Monday proved to be no exception.

Trump also predicted that John Kerry might run for president, and took issue with a New York Times report about the FBI. Though Trump was not seen for very long on Labor Day, he was certainly heard.