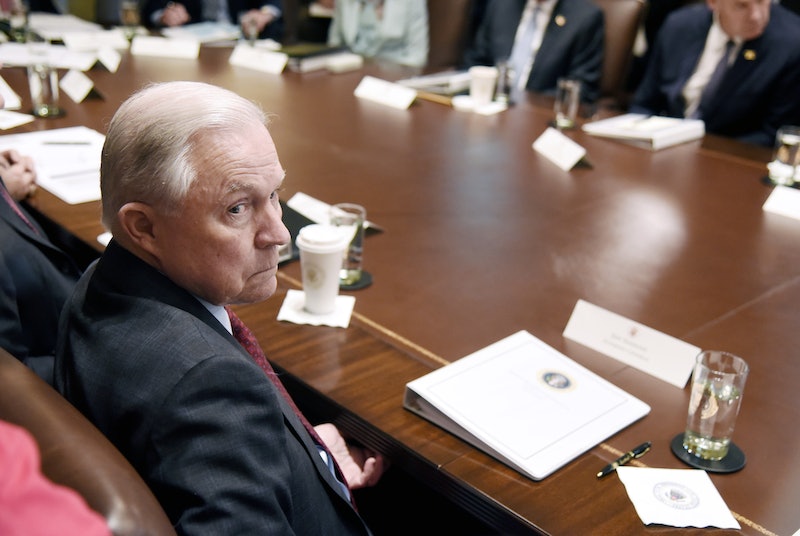 Lately, one of President Donald Trump's favorite people to berate on Twitter is Attorney General Jeff Sessions. And while the rest of the country rested on Labor Day, the AG didn't get a break from the president's complaints. Trump's latest tweets about Jeff Sessions suggest that the president has a very specific opinion on how the Department of Justice should be run.

"Two long running, Obama era, investigations of two very popular Republican Congressmen were brought to a well publicized charge, just ahead of the Mid-Terms, by the Jeff Sessions Justice Department," Trump tweeted on Monday. "Two easy wins now in doubt because there is not enough time. Good job Jeff."

Trump was apparently referring to the indictments of Republican congressmen Duncan Hunter and Chris Collins. Both of these indictments came down in August, so they were neither "long running" nor "Obama era," as Trump claimed in his tweet. Both men, CNN noted, were early supporters of Donald Trump, and their indictments had nothing to do with the president. Collins, Time explained, was indicted for insider trading, and CNN reported that Hunter is being charged with various financial crimes stemming from his misuse of campaign funds and subsequent attempts to hide that misuse.

The president's choice to sarcastically criticize Sessions related to those two charges coming right before the elections suggests that he would have preferred that Sessions block those indictments on political grounds. In February, Democratic Rep. Adam Schiff wrote an op-ed in Esquire arguing that Trump wanted to make the Department of Justice into a political tool — and these tweets back up this assertion.

"The Democrats, none of whom voted for Jeff Sessions, must love him now. Same thing with Lyin’ James Comey," Trump wrote. "The Dems all hated him, wanted him out, thought he was disgusting - UNTIL I FIRED HIM! Immediately he became a wonderful man, a saint like figure in fact. Really sick!"

In a veiled way, the second tweet suggests that Trump is planning on firing his attorney general, which a recent Washington Post report said that he wanted to do. There's a lot more going on in that tweet, though. Trump's tweet suggests that he believes that Democrats' opinions of Comey changed because Trump fired him. In reality, Democrats rallied around Comey — regardless of his actions as FBI director — mostly because they believed that Trump firing him amounted to obstruction of justice. After all, Comey was leading the FBI investigation into the Trump campaign's ties with Russia.

Sessions is another story, though. Most Democrats still highly object to many of Sessions' positions; for example, Sessions came out in support of the zero-tolerance policy that resulted in hundreds of migrant families being separated. However, there are other cases in which people across the political spectrum — not just Democrats — have come out in support of Sessions for upholding the rule of law, for example by recusing himself from the Russia probe. The Collins and Hunter indictments didn't have anything to do with Sessions directly, although as the top Justice official, Trump seems to believe that he could have stepped in and stopped them. In the United States, though, the Department of Justice isn't meant to function as a political tool to protect the party in power — despite what the president's tweets suggest.