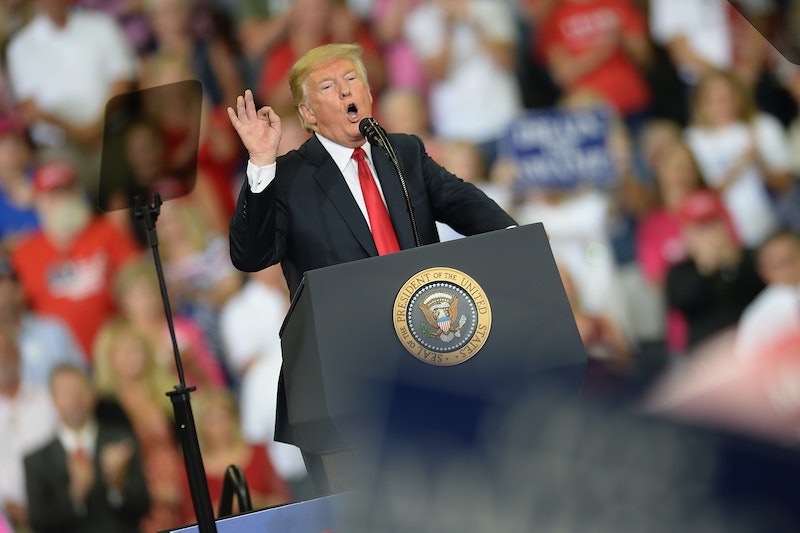 President Donald Trump is campaigning to "keep American great again," and crowds were cheering for him Thursday night. Amid praising his administration's progress and telling supporters to vote Republican this November, Trump lambasted the idea that Democrats want to impeach him. At his Montana rally, Trump warned that impeaching him could lead the U.S. to eventually become a "third-world country."

Trump argued that he's doing an amazing job, but that liberals supposedly don't care about his performance. As one aide apparently told him, "They're so angry because you've upset their entire way of life." Thus, Trump believes the Democrats will do anything to get him out of office, regardless of the ratings, trade deals, and tax cuts.

With this thought process, Trump imagined any president whose party holds a minority in Congress will get impeached before they're given a chance to perform, hence the danger with Republicans losing the majority to Democrats after the midterms this November.

In Trump's thinking, Democrats will never give Republican presidents a chance, and Republicans will never give Democratic leaders a chance. With a cycle like this, sparked by his own impeachment, Trump says the United States will become a third-world country.

"I see the anger and the hatred [from liberals]," Trump said.

Trump allies found what they thought was proof Democrats want to impeach the president after a video surfaced of Senate Minority Leader Chuck Schumer at a parade earlier this week. In the video, someone from the sidelines shouts, "When are you going to impeach Trump?" and Schumer responds, "The sooner the better."

"We got to get a few Republicans," Schumer adds, speaking through a bullhorn to be heard over the crowd. "The Democrats are on your side." Schumer's words allude to a desire to win a Democratic majority in Congress.

Schumer apparently misheard the question shouted from parade sidelines, however. "After a number of questions along the parade route about the fate of the President Trump’s Supreme Court nominee, the senator believed he was being asked, 'When will you defeat Trump,' and responded, 'the sooner the better,' noting that we need Republicans to defeat the nomination [of Kavanaugh]," Schumer's spokesman told Politico.

On the whole, Democratic leaders have actually avoided speaking of impeachment, despite the fact a CNN/SSRS poll published earlier this summer found 42 percent of Americans believe Trump should be impeached and removed from office.

Nancy Pelosi, Minority Leader of the United States House of Representatives, called impeachment "a gift to the Republicans" when speaking with Rolling Stone earlier this year. She, like other Democrats, argues that Robert Mueller's investigation needs to be completed before any talk of impeachment can proceed.