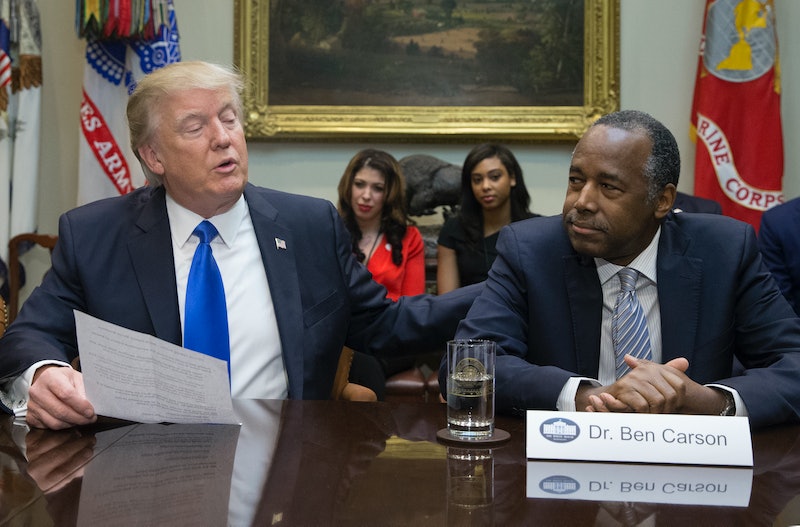 "Thanks to @realDonaldTrump's leadership, we are putting America's most vulnerable first," Housing and Urban Development (HUD) Secretary Carson tweeted Thursday, alongside the proposed policy announcement. "Our nation faces affordable housing challenges and hundreds of thousands of citizens are waiting for many years on waitlists to get housing assistance."

Bustle has reached out to HUD for comment. If it becomes law, this new housing proposal would end the practice of allowing mixed-immigration status families to live in a single public household, The Washington Post reported.

In 1980, HUD pushed forward a law to prevent undocumented immigrants from receiving federal financial assistance, per Politico. Until now, however, undocumented immigrants could still reside in public housing as long as one or more of their family members were citizens, permanent residents, refugees, or asylum seekers eligible to receive subsidized housing. The Trump administration is seeking to change this allowance entirely with its latest policy proposal, Politico reported.

Citing data from the National Low Income Housing Coalition (NLIHC), Politico reported that anywhere from 22,000 to 25,000 households that rely on public housing or rental assistance are made up of mixed-status families. That means at least one person in each family is eligible for public housing benefits and at least one is undocumented. The majority of these mixed-status families are located in New York, California, and Texas, per BuzzFeed News.

Undocumented immigrants are currently not eligible to receive public housing assistance; families and households therefore only receive subsidies that cover family members who are citizens or documented immigrants, though they can still live with undocumented family members in the same home if they pay higher rent. The Trump administration thinks HUD's proposed policy would reduce public housing wait lists for citizens and other people eligible for public housing assistance, The New York Times reported. But many housing and immigrants' rights advocates have expressed concern that the new rule would merely serve to split up thousands of immigrant families.

Karlo Ng, a supervising attorney at the National Housing Law Project, told BuzzFeed News that HUD's policy proposal appeared to be "part of the administration’s overall attack on immigrant families."

Ng also told Politico that even if every single one of the roughly 25,000 households occupied by mixed-status families were to free up their public housing units, it would hardly make a difference for the millions of families currently waiting to receive public housing assistance.

NLIHC President and CEO Diane Yentel made a similar point, telling BuzzFeed News that "the majority of [mixed-status families] would likely split up their families rather than lose the assisted unit." So instead of freeing up units for other people eligible for public housing assistance — like Carson suggested — the new policy would likely "scare or force families into breaking up their household," Yentel said.

According to BuzzFeed News, the Trump administration sent the proposed rule to Congress on Wednesday, where it will undergo a 15-day review period before becoming available for public comment.