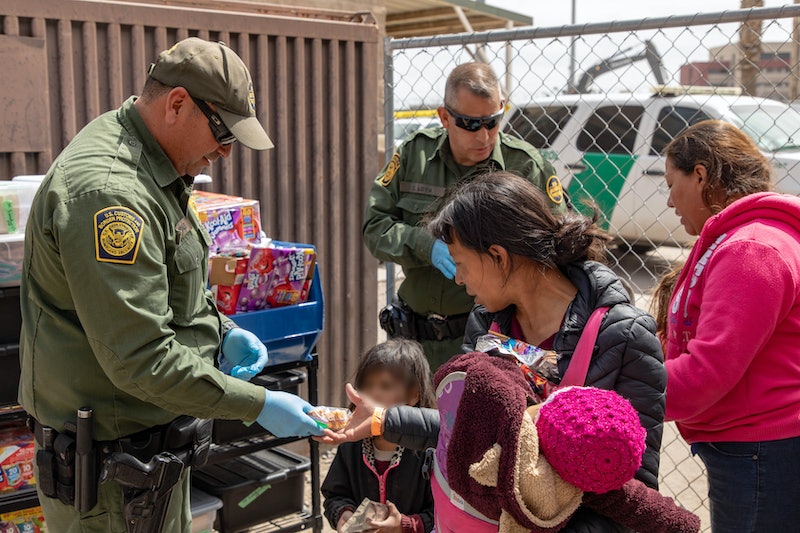 On Monday, the Trump administration encountered a road block to enforcing one of its controversial immigration policies. Trump's policy for asylum seekers got blocked a judge — and the injunction, or order prohibiting the policy's enforcement, is set to take effect on April 12. However, the lawsuit seeking to permanently put a stop to the policy is still ongoing.

As the Associated Press (AP) reported, the injunction was issued by U.S. District Judge Richard Seeborg in San Francisco as part of a broader lawsuit case regarding the policy. The injunction prohibits the Trump administration from "continuing to implement or expand the 'Migrant Protection Protocols [MPP]'" policy as the case is being heard, BuzzFeed News noted.

As the outlet reported, the MPP policy, also known as the Remain in Mexico policy, went into effect on Jan. 28. It barred certain migrants entering the United States through Mexico — including many families from Central America — from staying in the United States as they await their asylum trials, Reuters reported. Forcing asylum seekers to remain at their point of entry typically hasn't been standard practice for U.S. immigration authorities, BuzzFeed News noted. Historically, as the AP described, families applying for asylum in the United States are released in the country until their hearing dates.

BuzzFeed News noted that the American Civil Liberties Union (ACLU) filed the lawsuit on behalf of 11 asylum-seekers who were forced to remain in Mexico as they await their hearings. Reuters reported that the judge noted that these 11 individuals can enter the United States beginning on Sunday, though the U.S. government can detain them while they wait for their cases to be heard.

Judy Rabinovitz, a lawyer for the ACLU who argued the case, praised the judge's decision to issue the injunction. “Try as it may, the Trump administration cannot simply ignore our laws in order to accomplish its goal of preventing people from seeking asylum in the United States,” she said, per the Wall Street Journal.

Melissa Crow, the senior supervising attorney at the Southern Poverty Law Center, also commended the decision, saying it protects migrants' safety. "Today’s victory is especially important amidst reports that the Trump administration is planning to move toward even more extreme immigration policies,” she said to the New York Times. “The decision will prevent incredibly vulnerable individuals from being trapped in dangerous conditions in Mexico.”

Though, as USA Today noted, in a court filing for the case, the Department of Justice's lawyers staunchly defended the MPP policy. "The [Migrant Protection Protocols are] a lawful implementation of DHS's broad prosecutorial discretion over when and how to initiate removal proceedings … and whether to limit entry into the country during the pendency of those proceedings," the department's lawyers wrote, per USA Today.

The Trump administration can appeal Judge Seeborg's decision, the AP reported. As Vox indicated, it seems very likely that U.S. officials will move forward with an appeal prior to Friday, when the injunction is set to take effect.