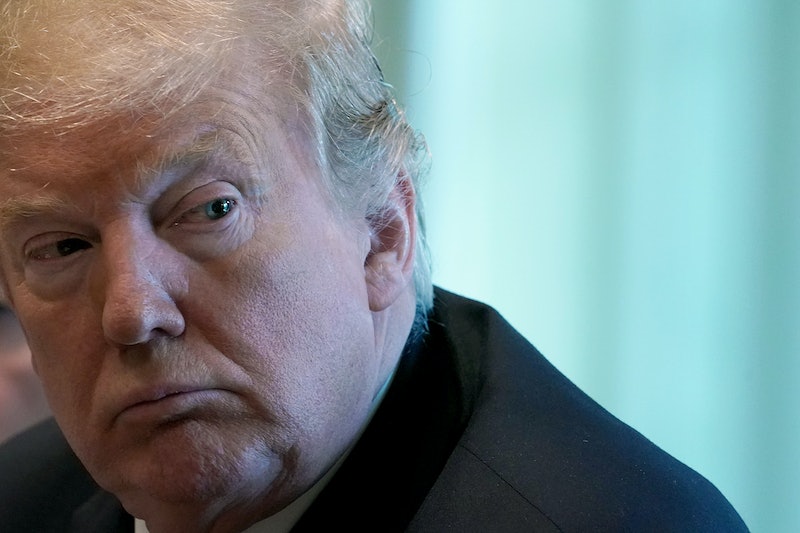 After being kept in the dark for years, it looks these documents might finally see the light of day. Trump's tax returns were formally requested by the House Ways and Means Committee on Wednesday — but it wasn't Trump that the committee contacted. Rather, House Ways and Means Committee Chairman Richard Neal went straight to the source, writing a letter to the IRS requesting six years of POTUS' tax returns, as well as information on several of his businesses. Now, it looks like the president has few options left, beyond attempting legal recourse.

In his letter to the IRS on Wednesday, Neal cited a specific IRS code, which he claimed to be the source of his authority in requesting these documents. This tax code is Internal Revenue Code section 6203 (f), which is also known as "method of assessment," per Cornell Law School.

Under the Internal Revenue Manual, individual income tax returns of a President are subject to mandatory examination, but this practice is IRS policy and not codified in the Federal tax laws. It is necessary for the committee to determine the scope of any such examination and whether it includes a review of underlying business activities required to be reported on the individual income tax return.

On Wednesday evening during a press conference, when Trump was asked about the new effort by the House Ways and Means Committee, he said, "Is that all? Oh, usually it's 10, so I guess they're giving up."

No, I’m — we’re under audit, despite what people said. And we’re working that out as — I’m always under audit, it seems. But I’ve been under audit for many years because the numbers are big, and I guess when you have a name, you — you’re audited. But until such time as I’m not under audit, I would not be inclined to do that.

For those wondering why there's so much speculation over whether a House committee has the right to request these documents, the simple answer is that there's no historical precedent for this. Per CNN, this is the first time a president has resisted the release of his tax returns. Therefore, it's not quite clear how, if at all, the president will challenge this new request, though it appears it would likely end up in some form of legal battle over whether the committee has the right to demand this information.

Already, some Republicans have signaled their willingness to resist the request by the committee. A few are already acting on it. Kevin Brady, the Republican leader on the House Ways and Means Committee, wrote a letter to Treasury Secretary Steven Mnuchin on Wednesday in response to the committee's request. He called the request an "abuse" of the committee's authority, writing in part, "This particular request is an abuse of the tax-writing committees' statutory authority, and violates the intent and safeguards of Section 6103 of the Internal Revenue Code as Congress Intended."

Now, politicians on either side of the political aisle will have to wait to see the response from IRS Commissioner Charles Rettig. If he signals his approval in releasing the returns, Trump's only recourse appears to be the legal route. He has not signaled any intention to take this matter up in court as of yet.