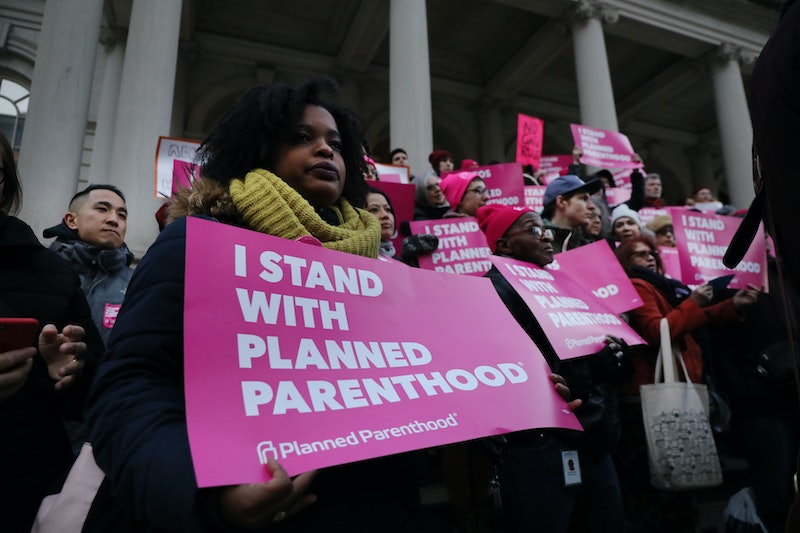 On Thursday, a U.S. federal judge temporarily froze Trump's Title X abortion rule. Politico reported that U.S. District Court Judge Stanley Bastian, who was appointed by former president Barack Obama, issued the injunction. The ruling takes effect nationwide and has everything to do with the Title X family planning program.

Politico reported at the time that the ruling would effectively redirect tens of millions of dollars away from abortion service providers to faith-based health care services. In February, ACLU Reproductive Freedom Project senior staff attorney Ruth Harlow told Bustle that the ruling was a "malicious" move to "prevent Title X patients from receiving full information about their care options."

According to Politico, Bastian's order came just hours after he heard arguments in favor of the Title X family planning program from the National Family Planning and Reproductive Health Association. According to the Kaiser Family Foundation, advocates of the program argue that the Trump administration's regulations would, among other things, "block the availability of federal funds to family planning providers that also offer abortion services."

There may be a misconception among some people about federal money and abortion services. It's worth mentioning here that federal funding cannot go to abortion services in the United States. That's because the Hyde Amendment prohibits federal financing for such purposes. Instead, the majority of federal Title X funding in this case goes to critical non-abortion services, including STD testing, cancer screenings like breast exams, contraceptive care, family planning counseling, and more.

The Washington judge isn't alone in his opposition to Trump's ruling. Bastian's injunction comes just two days after a federal judge in Oregon, Michael McShane, announced that he would put a hold on the Trump administration's Title X ruling. According to Politico, McShane called Trump's policies "ham-fisted" and said they would "reduce health outcomes" over America.

Washington Democratic Gov. Jay Inslee also extolled Bastian's temporary injunction. "The president’s relentless assault on women’s health is being fought with the full force of the law here in Washington state," Inslee said on Thursday. "We will not allow this or any presidential administration to take women’s constitutional rights away, and we will not allow doctors and nurses to be silenced when it comes to giving patients the information and medical care they need."

"But we know this is not the end of the road," Harlow went on to say. "The Trump administration has made clear that they stop at nothing to curtail access to contraception and other reproductive health services for low income people."

"We will continue," Harlow added, "to fight for what is right every step of the way."