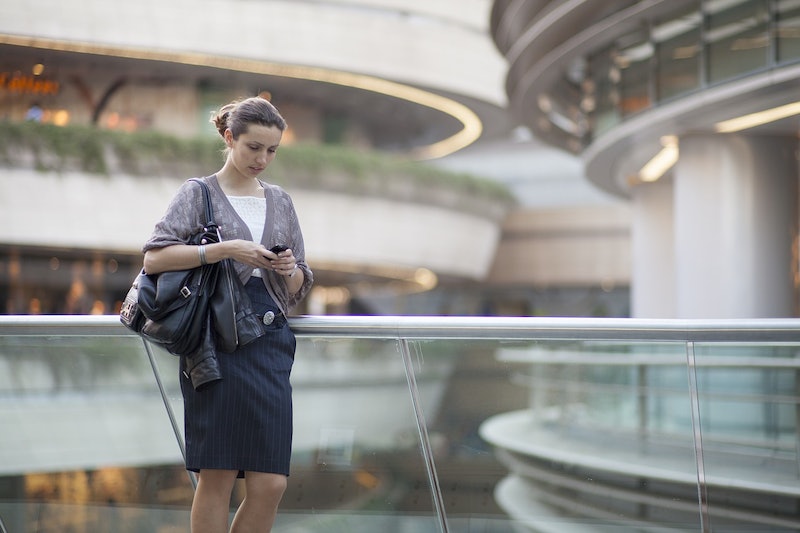 When it comes to career advice, everyone has an opinion. So often, we're told that if we want to be a boss, act like one — dress for success, "fake it 'til you make it," and on and on we go. Science has come to a different conclusion, though, as it's finding that when it comes to how to be more successful at work, the answer is much simpler: be yourself. Be genuine. Be authentic.

A series of recent studies looked into authenticity in the workplace and just how much it matters; what they found was that authenticity might be the key to landing a new job and keeping it — failing to be yourself could hurt your position in the workplace and threaten your sense of belonging. In one of the studies, the authors found that participants who made a greater effort to "self-verify" (to think for and stay true to themselves, as opposed to trying to be someone else) improved their odds of landing a job by as much as five times. These same people more frequently used words like "I think" and "I feel," and took longer to think over their responses. So, the tendency for people to try to appear flawless during job interviews or in the workplace is actually the wrong direction to head in.

This "go big or go home" mentality that has us trying to pretend we're something we're not could also backfire when it comes to having expectations in our careers. While we're often encouraged to set huge goals and reach for the stars, research suggests that there's something to be said for being real about your abilities. In fact, one study found that when businesses used overly lofty goals for their employees, they can lead to more inconsistent results, dismiss how well people can do in the long run, and lead people to perform in a manner that's less risky overall. Furthermore, when people are faced with an unrealistic goal, they tend to make a goal of their own and work toward that anyway. Setting realistic goals looks to be the better path to take, because we're better able to stay committed to them.

We put up this facade because we want to hide our flaws and disguise our weaknesses; but if it makes you feel any better, remember that out of a negative can sometimes come a positive.

For instance, some research has found that people who are good at sales have the tendency to be more impulsive and say things they shouldn't. Another study learned that students with anxiety received better grades, and anxiety even helped improve job satisfaction for journalists.

Of course, none of this is 100 percent foolproof. Being yourself during a job interview will likely work in your favor if you're a qualified, likable candidate; but if "being yourself" means burping in front of the HR lady and telling her you'd rather be home watching Game of Thrones, best not to expect a second interview. Similarly, setting ambitious goals does work for some people, because it helps them to think outside the box and believe that they can achieve more than they think they can — an advantage for people who tend to underestimate and limit themselves. And while flaws are good, they're probably not so good for people who show up 20 minutes late to work every morning or can't make a deadline.

The best you can do is evaluate your surroundings to come up with the smartest plan of action, do what you can to avoid lying or stretching the truth, and stay true to yourself in trying to be a more valuable part of your company.