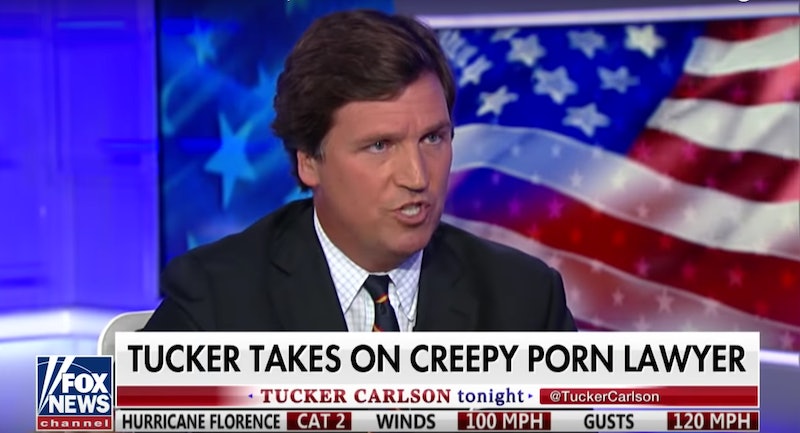 “In the past, [Avenatti has] demanded that we stop referring to him by a certain unflattering nickname," Carlson pledged at the top of the segment before introducing his guest. "We haven’t agreed to that demand, but tonight, as a gesture of goodwill, we will not use that nickname. Because we’re always grateful when guests are brave enough to show up in person, including in this case.”

Fox News hasn't responded to Bustle's request for comment on its choice of chyron. Avenatti responded on Twitter, scolding Fox News for its lack of professionalism and calling Carlson a liar.

"This is why so many people correctly conclude that @TuckerCarlson is a liar, just like Trump," Avenatti wrote in a tweet. He later added that to "the extent there was any doubt as to the lack of professionalism of @TuckerCarlson or @FoxNews before tonight, there is no longer."

"What happened with the chyron tonight was a disgrace," he continued. Complete garbage - trash television. A new low."

The host also accused Avenatti, who's representing Daniels in her litigation against the president, of "exploiting" his client. Carlson repeatedly brought up Daniels' continued work at strip clubs as evidence that she's "not thriving," wrongly claiming that "people don't do that unless they have no choice." In fact, many sex workers are content in their careers.

"You don't know anything about my client," Avenatti said in response. "Had you listened to any of her interviews, or seen any of her comments, you'd know exactly what she thinks of me." Daniels has showered praise upon Avenatti, telling the New York Times that seeing him on cable news is like watching "the Sistine Chapel being painted. But instead of paint. Michael uses the tears of his enemies."

Carlson has been a mainstay of conservative punditry for over a decade, first rising to prominence as a co-host of the now-defunct CNN program Hardball and later founding the conservative media site The Daily Caller.

Since Trump's election, he's emerged as a favorite pundit of white supremacists and neo-Nazis, as he frequently echos far-right, nationalist talking points on his program. One of the largest neo-Nazi websites on the Internet, The Daily Stormer, has praised Carlson as "literally our greatest ally," while former Ku Klux Klan leader David Duke applauded him on Twitter for opposing multiculturalism.

"God bless Mr. Carlson for focusing on these vital issues," wrote Duke in 2017.

Avenatti, meanwhile, says that he's considering a run for president in 2020, and has been visiting early primary states in an apparent effort to drum up support for his potential candidacy.