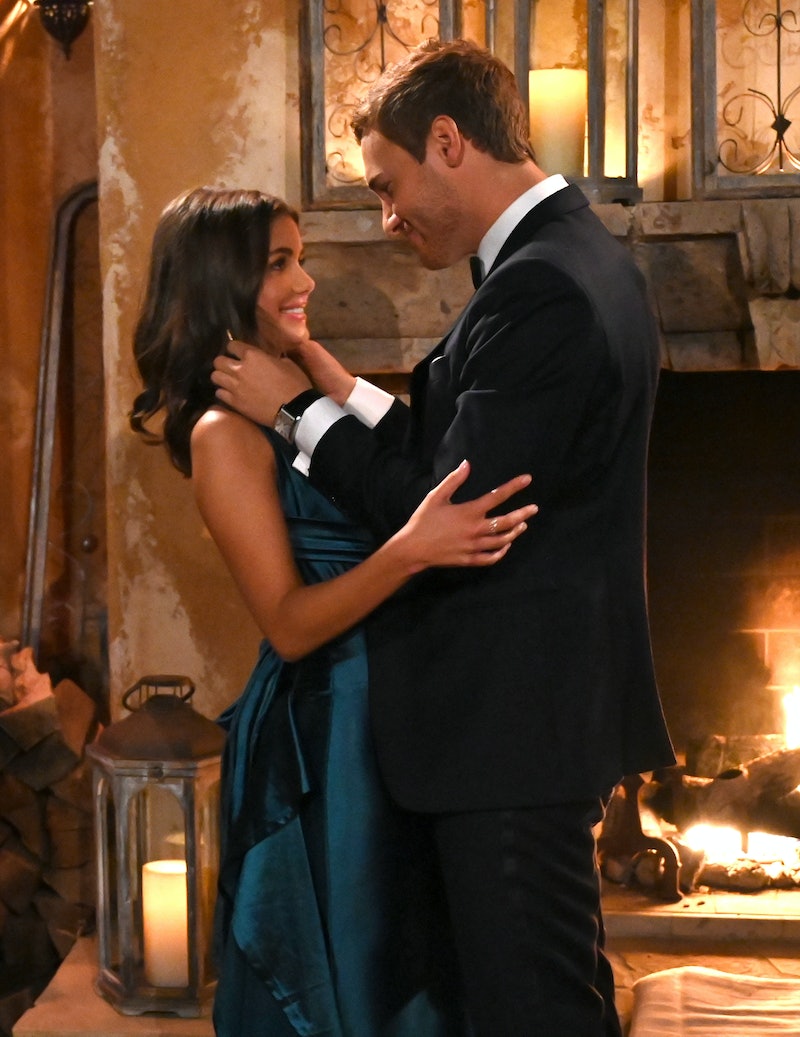 Peter might be confident about Hannah Ann after their one-on-one date in Santiago, Chile, but Bachelor Nation has a few concerns — and these tweets about Hannah Ann crying on The Bachelor prove that Peter really needs to stop rewarding the drama. During their romantic sight-seeing date around Santiago, Chile, things seemed to be going well between the couple until the 23-year-old model confessed that she had never been in love before, and Peter began to have second thoughts.

While it makes sense that Hannah Ann might not have ever fallen in love before — after all, she's one of the youngest women on the show — Bachelor Nation wasn't truly concerned until Peter seemed to change his mind about their relationship status after she broke down crying in front of him. Peter kept asking Hannah Ann about why she felt she was ready for The Bachelor (which traditionally ends with an engagement) when she hadn't been in love before, despite dating someone for over 3 years at home. "This is what I want because I haven't found that true love in my past," Hannah Ann told him during their dinner. "I just feel like your qualities and what you possess are similar to what I was raised to have wanted."

Her diplomatic answers only served to make Peter more concerned about Hannah Ann being "ready" for their relationship, so he excused himself to the patio to think. A few minutes later, a tearful Hannah Ann joined him, confessing that she can't "just smile through it" anymore and that she had real feelings for him — and just like that, Peter was ready to offer her a rose. He may have claimed that it was because she showed him something "real," but Bachelor Nation had some other ideas about what caused Peter's quick change of heart.

"I think Peter's love language is Tears," former bachelor Nick Viall wrote on Twitter on Feb. 3, and in an appearance on Good Morning America the following day, Peter seemed to confirm just that. "If all the women were getting along super well, they probably wouldn't have been super into me," he said on the show, referencing this season's seemingly-endless cycle of drama and tears. "If it was too easy, that wouldn't have been a good thing."

Peter has been called out for "rewarding" the drama multiple times — most notably, with conflict between Alayah and Victoria P. that resulted in the former's double elimination and almost caused a mutiny amongst the girls in the house — and Bachelor Nation seems to confuse drama and tears with a genuine connection. While it's possible that the pressure of the situation really did get to Hannah Ann and cause her to break down on their date, it also wouldn't be surprising if she noticed that he tends to hand out roses after particularly emotional moments.

Think about it: Sydney got a rose for telling him Alayah was "fake," Alayah got a rose for a date she wasn't even on for coming back to "set the record straight," Kelsey got a pre-Rose Ceremony rose after coming to him to talk about her fight with Tammy, and both Tammy and Mykenna got to stay after interrupting the Rose Ceremony with a "mini cocktail party," as Victoria F. explained it. Based on that alone, it would make sense for Hannah Ann to start crying when she thought she was going home — after all, it worked for so many other people.

But while Peter might think all of the drama is a "good thing" and shows that the women really care about him, Bachelor Nation is completely over him indulging everyone:

Unfortunately for Bachelor Nation, it seems like there's still plenty more fighting and tearful conversations ahead. Which means a whole lot more roses to hand out.