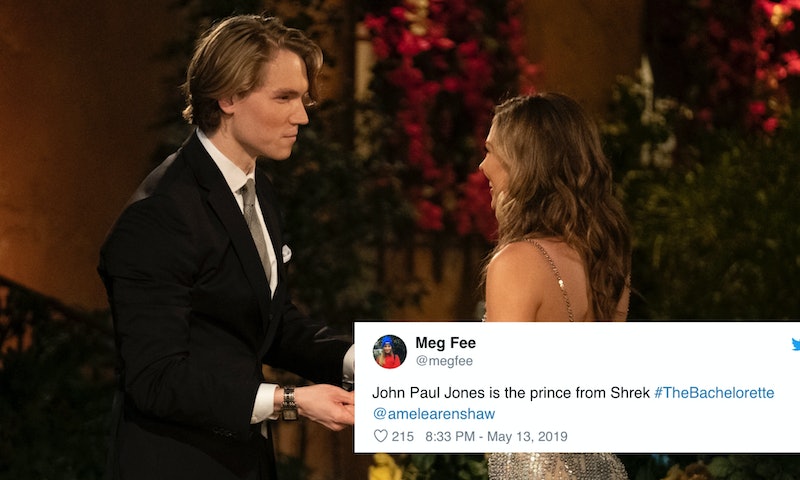 Hannah Brown's season of The Bachelorette is finally here, which means she's officially met all of her contestants. Some of them have even made a big impression on fans, including one who repeated his name three times during their first conversation just to make sure she wouldn't forget it. Barely one night in, and there are already so many tweets about John Paul Jones from The Bachelorette comparing him to basically every white male character and celebrity ever.

As soon as John Paul Jones (by the way, he can only be addressed by all three of his names) strolled up to the Bachelor mansion to meet Hannah, he made sure that she was aware of who he was... and everyone watching at home took notice, too. With his long blonde hair and chiseled face, he looked familiar to a whole lot of people, and fans couldn't help but say so on Twitter.

It's true: John Paul Jones has a lot of celebrity lookalikes, and that's not necessarily a bad thing. But the range of the comparisons that is happening includes animated characters, children, and adult celebrities alike, which is a little mind-blowing.

Some people seem to think that John Paul Jones looks like another star famous for having three names — Jonathan Taylor Thomas. That seems appropriate.

Others were convinced that he looked like Chad Michael Murray in Freaky Friday.

And others compared him to "the kid from Good Luck Charlie."

Other notable roles that John Paul Jones may or may not have had include sports movies and shows in Friday Night Lights and Remember The Titans.

There's also a small chance that he is actually a Hanson brother in hiding.

Or maybe he starred in Supernatural or the early 2000s Disney Channel hit Even Stevens? You never know.

But the overwhelming majority of people are comparing him to Prince Charming from Shrek, and it's hard to deny that the resemblance is real. In a live action version of the movie, John Paul Jones could totally audition for this role.

So far, it's hard to say what John Paul Jones' future on The Bachelorette looks like, but he definitely made an impression on Hannah, who had to say his name three times fast as soon as he walked away — that's something, right? It's probably safe to assume that as long as he lasts on the show, the memes will continue... and knowing Bach fans, they will only get better.

JPJ's three names may even give him a leg up on the competition, because considering how many contestants there are on night one, he's definitely ensured that he will stick out to Hannah, even though she has so many names and faces to remember. Now, we just have to wait and see what John Paul Jones thinks about these celebrity comparisons himself. Was he intentionally going for the Prince Charming in Shrek look, or was this accidental? Please fill the fans in, JPJ.