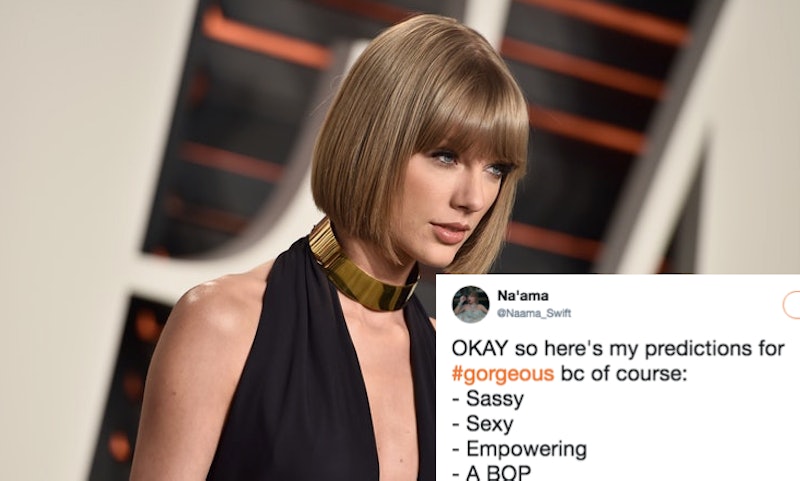 Taylor Swift is back at it again with making everyone lose their minds on a weekday afternoon. On Thursday, Swift Instagrammed a teaser for her new song "Gorgeous." While it was only a small taste, it got her fans freaking out immediately, and many of the tweets about Taylor Swift's "Gorgeous" are sharing what we can all expect.

Swift first held a listening party for Reputation at her home in London on Friday, Oct. 13 — surprise, surprise, because 13 is Swift's favorite number and she's tricky AF. According to Just Jared, she also had a listening party at her Rhode Island home on Wednesday, Oct. 18. Some fans who attended the sessions have been sharing their thoughts on the album in the time since. They haven't shared too much, because they probably aren't allowed to, but some fans have given their overall thoughts on the album's sound and on "Gorgeous" in particular.

For instance, E! News reported that one fan described the album on Tumblr as a "sexy, shady, a nighttime album, more emotionally complex than 1989 and better than Red." And as seen below, a lot of listeners had very positive things to say about "Gorgeous" — to the point that some Swift fans who haven't heard the new music are worried that it won't end up living up to the high standards that have been set.

As far as the actual listening parties goes, according to Teen Vogue, the singer is reported to have hand-picked the 100 fan attendees for the London party from Twitter. One fan shared a long message about the event on their Twitter account. It reads in part:

The last 7 hours consisted of listening to Taylor’s unreleased album, eating chicken tenders whilst talking to her Dad about her childhood and getting to give Taylor the biggest hug. She knew our names and said me and Katie were the light of her life !!!!!!!"

What's better than fried food with your idol?

While fans like the one above know everything about the album and how it sounds, what those of us who weren't at a listening session know so far about "Gorgeous" is that it features a baby saying "gorgeous", includes a synthesizer, will be available at midnight on Oct. 20... and is called "Gorgeous". So, yeah, we don't know much.

But fans who have heard the album seem to be particularly excited about the new song. The chorus is in their heads, it is being widely described as "a bop," and it, apparently, "will destroy everything else on the charts." Well, watch out Cardi B, I guess. Here's what fans are saying.

The Chorus Is Addictive

And this is not even the most dramatic reaction.

The Lyrics Could Cut Glass

Get ready to be destroyed, slain, killed, etc.

It Brings About Strong Emotions

I mean, if you heard it with actual Taylor Swift, then who can blame you for still being emotional.

The Reviews Are This Good

Might as well just glue on all of your clothes and accessories while you're at it.

What If The Reviews Have Been Too Good...

Is it a risk worth taking? Maybe everyone should just play it safe and not even listen to the song.

There Are Even Some Threats

At least it's seasonally appropriate?

There Are Some Very High Standards

This song clearly has a lot to live up to.

And This Just About Sums Up How All Swift Fans Feel

It won't be too much longer now until the entire world gets to hear "Gorgeous" and then, on Nov. 10, everyone will get to hear Reputation. Expect many more enthusiastic tweets between now and then.

More like this
Everything To Know About Taylor Swift’s 10th Studio Album, 'Midnights'
By Grace Wehniainen and Jake Viswanath
There's A Taylor Swift Easter Egg In Ryan Reynolds' 'Deadpool 3' Teaser
By Marina Watts
Twitter Is Freaking Out Over Rihanna’s 2023 Super Bowl Halftime Show Announcement
By Stephanie Topacio Long
Is Dua Lipa Dating Trevor Noah? New Photos Show Them Kissing & Hugging
By Brian Anthony Hernandez and Martha Sorren
Get Even More From Bustle — Sign Up For The Newsletter