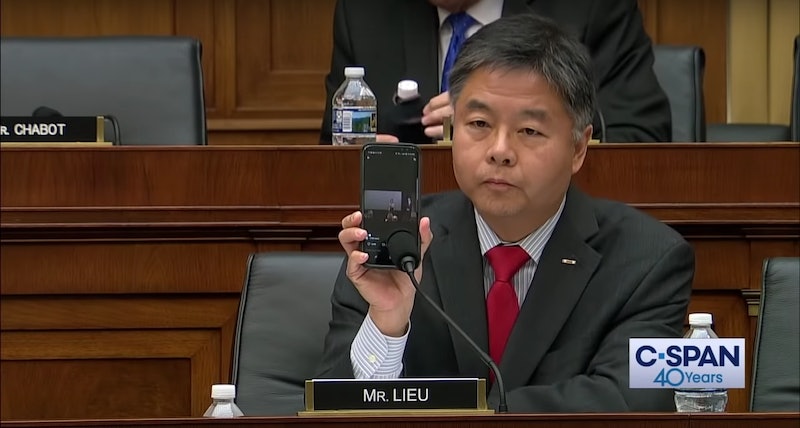 On Tuesday, a congressional hearing on the rise of white nationalism and hate crimes in America inspired a particularly striking moment — one which soon went viral in a number of directions. Following his tense exchange with conservative commentator Candace Owens, thousands of tweets about Rep. Ted Lieu and his phone flooded the internet. Some of those tweets directly acknowledged the severity of the situation. Others, however, simply related to the moment and opted to use it as prime meme material.

The moment occurred when Lieu pulled his phone out and played a clip of Owens justifying the word "nationalism" by using a Hitler analogy, letting the video reverberate into the mic. The audio clip in question was taken from a conference in 2018 in the UK that Owens attended, where she said,

I actually don't have any problems at all with the word nationalism. I think the definition gets poisoned. Globalism is what I don't want. If Hitler just wanted to make Germany great and have things run well, OK, fine. The problem is that he wanted, he had dreams outside of Germany. He wanted to globalize. He wanted everybody to be German.

Following the moment, Owens soon insisted that Lieu had taken her words out of context. However, the image of Lieu holding his phone to the mic looking anything but pleased was immediate internet gold.

Here are some of the best tweets that used the photo of Lieu as a metaphor for any number of work-life, social, or political struggles: