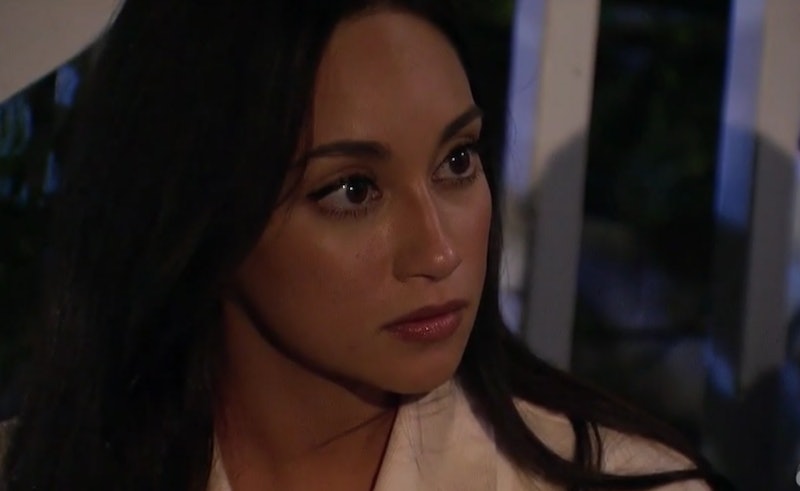 The trend of visiting exes continues on this season of The Bachelor, with Peter's ex-girlfriend Merissa Pence showing up to Victoria's hometown date. Pence knows her as a fellow Virginia Beach native, and had some not-so-nice opinions about her to share with Peter. As teased by the season trailer, the comments spiraled into a huge fight between Victoria and Peter that ruined their entire date. He didn't even get to meet her parents or grandma, who were all waiting in the living room for them the whole time.

When she coincidentally bumped into Peter, Merissa warned him to "be careful" with Victoria. "I just know what a good guy you are, and I would hate for any of who you are to be affected by somebody else," she said. "I don't think you deserve what you're on a date with right now." Of course, Peter was confused, and immediately brought the comments to Victoria's attention. Many people saw Victoria's reaction to Peter brining it up as "gaslighting" or leaning towards more toxic territory.

Fans who watched Hannah Brown's season of The Bachelorette know Luke P. had a hard time admitting his faults, and he became defensive when she would try to confront him. That's kind of what Victoria did when Peter confronted her, and fans are not letting her get away with it. They aren't shy about their feelings towards it, either. See the tweets for yourself.

Victoria & Peter Have No Clue How To Communicate

You can only imagine how these viewers felt when, after all of that, Peter ultimately decided not to send Victoria home and take her to the overnights portion of the season. Hey, it took Hannah Brown half a season to see that her and Luke P. weren't clicking, maybe Peter needs some time, too.

More like this
The 'Bachelor In Paradise' Schedule Shifts To 4 Hours Every Week After The Season 8 Premiere
By Brad Witter
You Can “Fall In Love” At The Resort Where Bachelor In Paradise Season 8 Was Filmed
By Brad Witter
‘The Ultimatum: Queer Love’ Is Officially On The Way
By Radhika Menon and Kadin Burnett
Rachel & Aven’s Fight In ‘The Bachelorette’ Finale Has Fans On Team Aven
By Grace Wehniainen
Get Even More From Bustle — Sign Up For The Newsletter