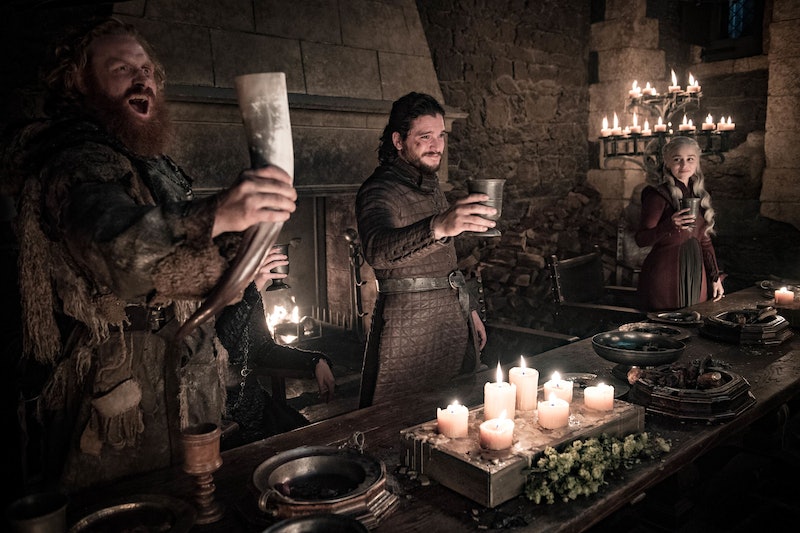 Spoilers ahead for Game of Thrones Season 8, Episode 4. After the tumultuous events at the Battle of Winterfell in last week's Game of Thrones episode, its survivors threw a huge party to celebrate getting out alive. Perhaps the most festive partygoer was Tormund Giantsbane, who soon became sloshed on wine and couldn't keep his feelings to himself. And while his drunken demeanor wasn't endearing to the people around him, tweets about drunk Tormund reveal just how much GoT fans loved the massive, redheaded wildling.

After the Northerners hold a funeral pyre for their fallen heroes, they host a feast, celebrating the fact that they're still standing. Tormund proceeds to get hammered on wine (from his massive drinking horn, of course) and speak loudly about a variety of subjects. But while he's happy that they've beat the White Walkers, his tongue soon gets the better of him.

"I saw him riding that thing," he tells the room, referring to Jon. "That's why we all agreed to follow him. That's the kind of man he is. He's little, but he's strong. Strong enough to befriend an enemy and get murdered for it. Most people get bloody murdered, they stay that way. Not this one!"

The wildling continues to edify Jon in front of Daenerys, whose face falls the longer Tormund's intoxicated speech continues. "What kind of person climbs on a f*cking dragon? A madman or a king!" he exclaims, wine spraying everywhere. But he doesn't stop there — oh no. Tormund decides to shoot his shot once again with Brienne, whom he lovingly refers to as "The Big Woman." Unfortunately for him, the feelings are not mutual, nor will they likely ever be.

Nevertheless, he saunters up to her table, first celebrating their recent victory against the Night King. But then things start to get a bit too real. "Now, which one of you cowards sh*t in my pants?" he asks with wide eyes. For some reason, his effortless charms are lost on Brienne, who gets up from the table (followed closely by Jaime, it should be noted).

As it dawns on him what the two of them are about to do, Tormund first becomes stoic, then overcome with emotion. "And after all that, this f*cker comes north and takes her from me," he tells an entirely uninterested Hound, in reference to Jaime. "Just takes her, like that. I mean it, Clegane. My heart is broken." But not for long, because just then a woman propositions him, automatically curing his broken heart.

Naturally, some fans were upset that Brienne chose the Lannister over Tormund, who was almost literally throwing himself at her. But the heart wants what it wants, and the newly minted knight decides to get it on with Jaime instead, admitting that she'd never slept with anyone before (but Tyrion kind of guessed that during their drinking game).

And after all that, as Tormund would say, Jaime rides away from Winterfell the next day — almost certainly to his death. As some fans pointed out, Tormund would never have done Brienne dirty this way! All he wanted was to marry "The Big Woman," have giant babies, and perhaps drink giant's milk together. You know, all of that totally normal couple stuff.

But Brienne has been pining after Jaime for seasons, so it makes sense that she picked the Lannister over Tormund. But you still can't help but feel for the giant man, who wears both his heart and his wine on his sleeve.