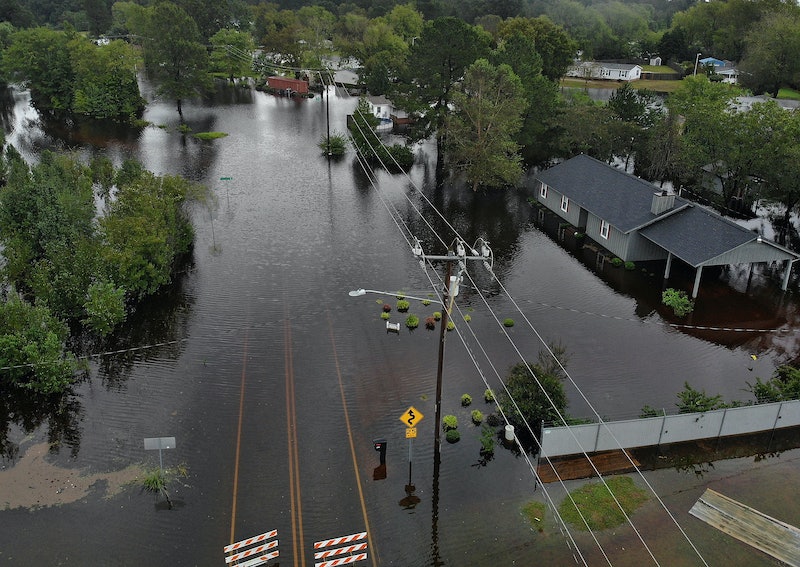 Florence has taken the lives of two more people — this time while in law enforcement custody as they were transferred between health facilities. Horry County Sheriff's deputies were transporting two women when the van they were riding in was submerged in flood waters. The two "detained" women who died in Florence floodwaters were mental health patients.

Brooke Holden, the Horry County Sheriff’s Office spokesperson, told Bustle in a statement that the vehicle — staffed by two deputies — was traveling on Highway U.S. 76 from Conway to Darlington. That's a drive of about an hour and 20 minutes in good conditions. This area of South Carolina is inland to the northwest from Myrtle Beach.

Holden said when the vehicle was about half a mile from the Little Pee Dee River, it was "overtaken by floodwaters." She said that the deputies who were in the vehicle tried to free the two women but were unable to do so. "The two deputies attempted to extricate the persons being transported," Holden said. "Despite persistent and ongoing efforts, floodwater rose rapidly and the deputies were unable to open the doors to reach the individuals inside the van."

The deputies were rescued and by a high water rescue team from the top of the van and transported to a local hospital, local TV station WLOS reported. The vehicle remains in the floodwaters due to rising waters and dangerous conditions, although the "recovery effort" is ongoing.

Horry County Sheriff Phillip Thompson says in a statement provided to Bustle, "Tonight's incident is a tragedy. Just like you, we have questions we want answered. We are fully cooperating with the State Law Enforcement Division to support their investigation of this event."

The two women were first described as inmates but that was clarified in later reports, according to local news channel WPDE. They were confirmed dead by the Marion County Coroner, although they have not yet been publicly identified by name. "They were trying to negotiate through fast-running water, and it just didn't work out," Marion County Coroner Jerry Richardson told the AP.

South Carolina's State Law Enforcement Division (SLED) will investigate the incident. Bustle reached out to the SLED for more information on their investigation. The law enforcement agency confirmed to WPDE that they were sending agents to the area.

The WMBF news team reported that the Little Pee Dee River has been at flood stage since the weekend and won't crest until Friday when it is projected to reach 16 feet — a full seven above normal flood stage. The road conditions in South Carolina were widely reported, even as early as Tuesday morning, as a "growing web of road closures," according to Jennifer Berry Hawes at The Post and Courier, who also reported Tuesday morning that there were 60 road closures in just Horry County. The Horry County Sheriff's Office posted many warnings about the floodwaters on its Facebook and Twitter page earlier on Tuesday.

"WE’RE HERE FOR YOU," the office's Facebook post, shared from the county's emergency management office, said. "Our hearts go out to those affected by the flooding in our County, and we hope you know that we are here for you no matter what may come. #TeamHorry is out in the streets working to ensure that everyone stays safe and dry, and we’ll be here until everyone goes home."

The death of the two women brings the total count of those killed by the storm to 37.