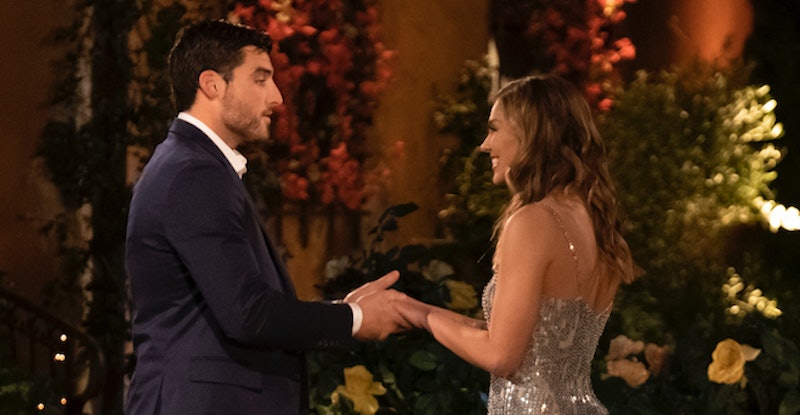 Alabama Hannah — our new, former pageant queen Bachelorette — is always down for a good time. She's a fun-loving gal, and she's going to need a man that supports her, loves her, and wants to grow along with her. Could Tyler G. be that guy? Well, maybe. We don't know a whole lot about him just yet, but if Tyler G.'s Instagram is any indication, he and Hannah may be a match made in reality television heaven.

According to his ABC bio, Tyler describes himself as a "laid-back" and "go-with-the-flow" kind of guy. He doesn't like to go to the club, and instead prefers SoulCycle and hanging out on his boat. Importantly, Tyler wants an "equal match" for him — a confident woman who can make him laugh, too. Tyler is currently pursuing a graduate degree in psychology from Florida Atlantic University, and he dabbles in dream therapy analysis on the side, which means that he uses dreams as a part of his patients' psychoanalysis. Tyler also "adheres to a strict Keto diet," so Hannah may be out of luck on ice cream runs. But these are the things we do for love.

Because the season just started, all we know about Tyler G. is what ABC has given us — that's why a deep dive into his social media is so needed. Let's see what makes Tyler G. tick.

He Loves The New England Patriots

He's from Connecticut, so it makes sense. Tyler G.'s Facebook and Twitter (his account is private) avatars have something to do with Tom Brady, which will make Bachelor fans in New England happy and probably annoy everyone else.

He Spends A Lot Of Time With His Family

Tyler lives in Florida for school right now, but before he left, it seems like he saw his family as much as he possibly could. There are so many snaps on his Instagram featuring his siblings and parents — it's pretty cute. It means that he's close with his family, and that's something that Hannah will love, too.

He Really Does Get Out On The Boat

His ABC bio specifically mentioned boating, but Tyler G.'s Instagram has many a picture of him on the water, so let's believe that if Hannah and Tyler G. end up together, she better get her sea legs.

He's Proud Of His Work

According to Tyler G.'s LinkedIn, he was the first official salesman for SpikedSeltzer, and the pictures of him not only drinking it, but sponsoring it, show that he was really dedicated to his job. And why not? Selling alcohol for a living seems like a good way to meet people and get them to instantly like you. This guy is probably the center of every party.

He Loves A #TBT

Look at this pic of baby Tyler G. and his parents at his high school graduation! What a sweet little teen babe. This is the stuff that's going to make Hannah melt for him.