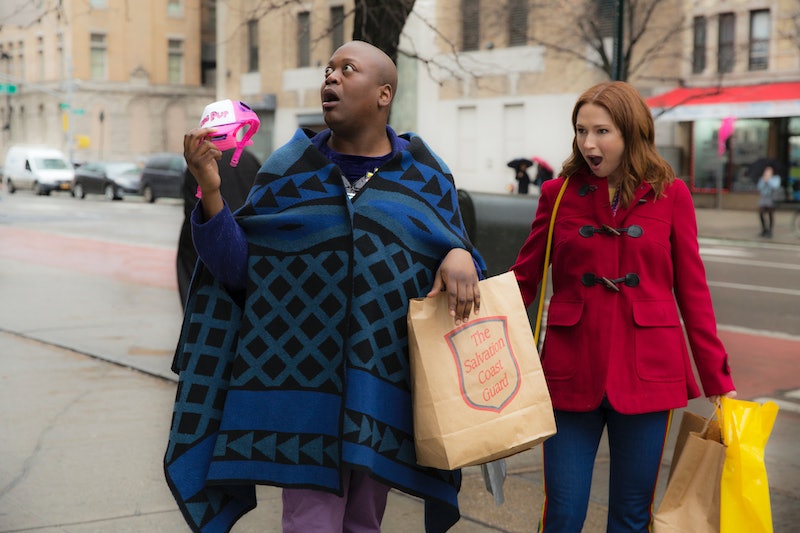 It's a fudging miracle! An Unbreakable Kimmy Schmidt interactive special is coming to Netflix next year, creator, executive producer (and occasional guest star) Tina Fey announced during an NYC FYSEE panel on May 8, per Deadline. Even more exciting? Aside from your favorite characters — including Titus (Tituss Burgess), Jacqueline (Jane Krakowski), Lillian (Carol Kane), and, of course, Kimmy (Ellie Kemper) — reprising their roles, the choose your own adventure standalone will have more hilarious jokes than ever, too.

“We’re thrilled to announce that we’re about to start production on an all-new interactive Unbreakable Kimmy Schmidt special, set to debut on Netflix in 2020,” Fey announced at the event, moderated by John Hamm (AKA Reverend Richard Wayne Gary Wayne), according to Deadline. She continued:

“Unbreakable Kimmy Schmidt was one of the first original comedy series on Netflix, and now it will be its first interactive comedy event. Fans will be able to make choices on behalf of our characters, taking different story paths with, of course, different jokes. I think it’s a great fit for our show and will be a great way to officially complete the series.”

So if last year's Black Mirror: Bandersnatch was a bit too dark for your liking, this will bring all the Kimmy-approved sunshine and rainbows to lighten your day. Plus, it's a fitting farewell to the four-season series, which took its final bow in January after debuting the second half of Season 4. During its run, which began in 2015, Unbreakable Kimmy Schmidt was nominated for the Outstanding Comedy Series Emmy every year and also earned 18 Emmy nominations in total.

While there's no word yet on when or where the plot of the new special will pick up, there are, of course, a couple of possibilities. The series finale concluded with a four-year flash-forward, showing all the main players seemingly getting their individual happy endings, namely Kimmy publishing her children’s book, The Legends of Greemulax, and Titus and Mikey (Mike Carlsen) getting married and adopting two babies. Will the story pick up in 2023? Fill in the blanks in between? The possibilities are endless.

Prior to the announcement, Fey and co-creator Robert Carlock told The Hollywood Reporter they'd been instructed by Netflix to be "coy" about a potential Kimmy Schmidt film. Fey did, however, confirm, at the time, that a freestanding movie was "definitely a possibility."

Kemper also dropped a few hints of her own to THR, adding, "I know we might go on to be doing a movie and I hope that that happens — I know it's not definite."

For his part, Burgess also noted that, if a movie should happen, he would be definitely be onboard to join the cast.

"I trust [Fey and Carlock] implicitly, so I can't imagine that they would have Titus be a departure from what we know and love," he shared with THR. "But also we would have to find these characters in a far different place emotionally and in circumstances to warrant a movie. Otherwise, it should just be another TV show. If they think a movie is the way to go, that just means that they have something really juicy cooking."

And, like Grylls, Kimmy knows a thing or two about surviving tough situations. And fans are surely rejoicing that her adventures are still alive (dammit).

More like this
Nicola Coughlan Shared A Lady Whistledown Excerpt From ‘Bridgerton’ Season 3
By Grace Wehniainen, Alyssa Lapid and Sam Ramsden
Everything You Need To Know About The 'Knives Out' Sequel
By Bustle Editors
A New 'And Just Like That' Table Read Pic Confirms A Key Character's Return
By Jack Irvin and Grace Wehniainen
The 50 Most Powerful Characters In The Marvel Universe, Ranked
By Johnny Brayson and Nola Pfau
Get Even More From Bustle — Sign Up For The Newsletter