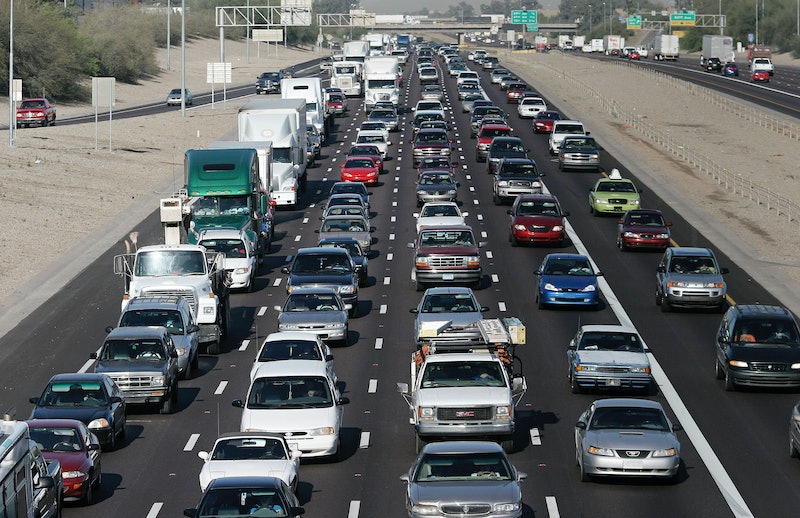 New York Gov. Andrew Cuomo signed a law Monday night that would open the approval for driver's licenses for undocumented immigrants in New York, CNN reports. Up until 1993, that was the status quo across the nation, but now, only 13 states, D.C., and Puerto Rico offer a legal license to those who can't prove their legal immigration status.

The New York proposal could benefit immigrants from Manhattan to the U.S.-Canada border, think tanks argue. But looking at the example of other states, there could also be risks.

The New York Post reports that the bill will go into effect in December, and New Yorkers without immigration papers could start applying then. In New York, according to The Wall Street Journal, all residents were able to obtain a driver's license until the 9/11 terrorist attacks, when then-Gov. George Pataki signed an executive order requiring social security numbers.

The bill would rescind the social security number requirement and also add new guidelines. The Democrat & Chronicle reports that immigrants would be able to use forms of ID from their countries of origin, like passports, to be able to apply. The text of the bill, available on the state senate's website, says that consular identification documents and foreign driver's licenses would also be accepted.

Applicants under the new rules would also — like every other New York applicant — have to pass a written test to get a learner's permit, attend driving school, practice driving, and take a road test. There are also fees associated with a license that range from about $65 to $95 depending on one's age and residence.

Would They Look Different?

The design of the New York licenses hasn't been released, but in California, which has a similar law in effect since 2015, the IDs say "Federal limits apply," according to The Los Angeles Times.

The back continues with, "This card is not acceptable for official federal purposes. This license is issued only as a license to drive a motor vehicle. It does not establish eligibility for employment, voter registration, or public benefits."

California has issued more than 1 million such licenses, according to the paper.

The New York law states that the wording on the new licenses will say, "Not for Federal Purposes," but otherwise should appear exactly the same — unless federal law were to require they be a different color or have some other marker.

The Fiscal Policy Institute, a think tank focused on New York state, released a report with some of the benefits from the program. First and foremost, it would improve the lives of immigrants in the state, the report reads, making it easier to get to school, work, and even the grocery store.

It would also make roads safer because everyone would be encouraged to pass a test (instead of driving illegally) and could help immigrants get jobs that require a driver's license, boosting the economy, the report reads.

For all New York drivers, the cost of insurance could go down up to $17, the Fiscal Policy Institute argues because there would be fewer uninsured drivers on the road. The institute estimates that 265,000 of the 752,000 newly eligible New Yorkers would sign up.

One of the biggest potential downsides would be for immigrants themselves if Immigration and Customs Enforcement (ICE) were to get ahold of the data and use it to identify New Yorkers for deportation. This was Cuomo's main concern before he signed the bill. "You could create a database for the feds to use to actually track down undocumented people," Cuomo said on WAMC public radio. "If we pass a bill that winds up targeting the undocumented, then shame on all of us," Cuomo told CBS New York.

This has happened in other states, immigrant advocates contend. NPR reported in January that the Vermont DMV has been accused in a lawsuit by Migrant Justice, a local immigrant activist group, of passing not just names but also photos, car registrations, and more to ICE, resulting in arrests and deportations. Bustle has reached out to the Vermont DMV commissioner for comment.

Groups like the National Immigration Law Center have contended that this happens across the country, and the ACLU of Northern California also advises people with the non-citizen driver's license not to use it when interacting with federal officials — even TSA at the airport.

Before signing the bill, Cuomo's concerns were dismissed by Attorney General Tish James. "The legislation is well-crafted and contains ample protections for those who apply for driver’s licenses. If this bill is enacted and challenged in court, we will vigorously defend it," she said.

The text of the New York law says that records will not be released to law enforcement except in the case of a subpoena or specific warrants signed by a judge. The Wall Street Journal reports this in essence limits the disclosure to criminal investigations into specific drivers.

The law text also places limits on employees of the Department of Motor Vehicles — or anyone else with access to the record. They must not "disclose such records or information to any agency that primarily enforces immigration law" or any employee of such an agency.

For New Yorkers who newly qualify for a license come December, these benefits — and risks — will certainly play into their decision whether or not to apply. It seems the state would benefit if they do.

More like this
6 Organizations Fighting Police Brutality That You Can Support Right Now
By Syeda Khaula Saad and JR Thorpe
Watch Jacinda Arden’s Devastatingly Honest Resignation Speech
By Sam Ramsden
What The UK Blocking Scotland’s Gender Recognition Bill Means
By Sam Ramsden
42 Black Owned Fashion & Beauty Brands To Support Today & Always
By Mekita Rivas, Shea Simmons, Kui Mwai and Dominique Norman
Get Even More From Bustle — Sign Up For The Newsletter
From hair trends to relationship advice, our daily newsletter has everything you need to sound like a person who’s on TikTok, even if you aren’t.