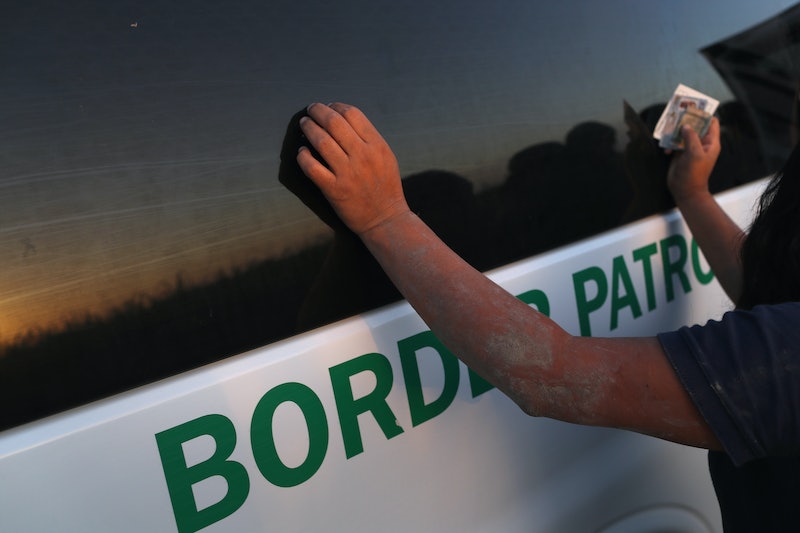 Protesting Customs and Border Protection (CBP) can get you charged with a misdemeanor — at least at the University of Arizona. That has been the experience of two Arizona students who face criminal charges for protesting CBP on campus, The Arizona Republic reported. "Student protest is protected by our support for free speech, but disruption is not," the university's president wrote in an open letter to the campus community on Friday.

This incident happened outside of a classroom that Border Patrol officers were presenting in on March 19 as part of a career day event. In videos of the protest that went viral — and were picked up by conservative media outlets — protesters are seen calling the officers "Murder Patrol" and "an extension of the KKK." Afterwards, the protestors reportedly followed the officers until they left campus.

On Monday, DACA recipients on the campus denounced the move to charge the students. "Students at the UA decided to bravely stand up and be vocal about the threat Customs and Border Patrol's presence creates for our community," read a public letter signed "DACA recipients at the University of Arizona" circulated on Monday. "Their action is to be applauded and admired because they put their community before themselves and acted to protect us."

The university disagrees. The two students have not been named, but UA police announced Friday that they will be charged with "interference with the peaceful conduct of an educational institution." Jail time could be as much as six months if the two are found guilty of the Class 1 misdemeanor. There may be additional "criminal violations" announced at a later date.

UA President Robert Robbins explained the moves that were taken in a letter that both detailed recent developments and, as he wrote, served to "reaffirm the University of Arizona’s relationship with the leadership and the women and men serving in U.S. Customs and Border Protection."

"The incident between the protesting students and the Criminal Justice club members was a dramatic departure from our expectations of respectful behavior and support for free speech on this campus," Robbins wrote.

Student leaders wrote an open letter to the campus community in the days following the incident, calling unannounced visits by the U.S. Border Patrol "unacceptable." Student body president Natalynn Masters and other elected student leaders wrote that the mere presence of Border Patrol on campus "creates an environment which negatively impacts our DACA and undocumented community."

One of the organizers of the protest spoke to The Daily Wildcat about why protesting CBP was important to her in the days following the incident. "I knew Border Patrol was on campus, and around four miles south of campus, an entire family was detained, and they took a 12-year-old child, even though they had family members and community members present," the student told the paper. "You allow Border Patrol on campus, and a few hours later, a few miles from campus, a whole family is detained on a routine stop and taken."

Now those views may land two students in jail.