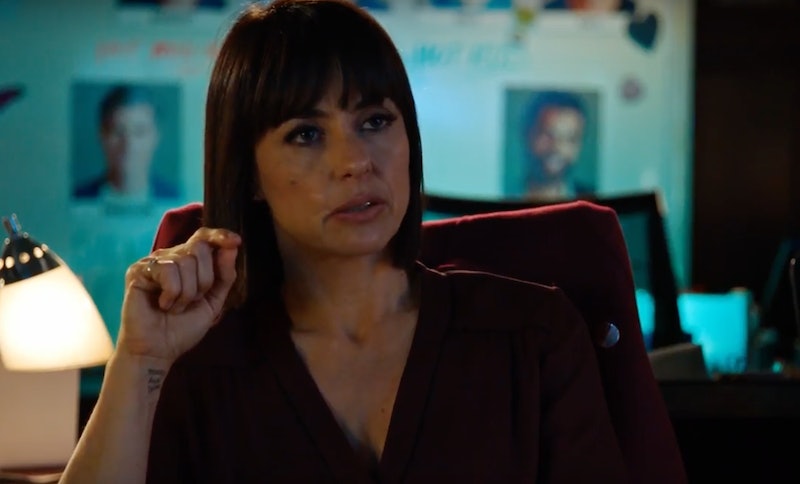 Hold on to your man buns, because Lifetime’s drama series about a The Bachelor-esque dating reality show is about to return. On Tuesday, the network released the trailer for UnREAL Season 3, which is scheduled to premiere on Feb. 26. (And yes, Rachel, Quinn, and the rest of the members of the production staff somehow still have jobs on Everlasting. Never forget that the fictional dating competition program has been responsible for multiple character deaths.) For the latest round of reality TV dating shenanigans, the Bachelor, er, the Suitor is a woman. And the trailer makes it pretty clear that Serena the Suitress, who is played by Masters of Sex star Caitlin FitzGerald, is doing things her way.

“From this moment forward, the only rules are the rules that I make,” Serena tells a room of contestants. And judging from the looks on the faces of Shiri Appleby’s Rachel and Constance Zimmer’s Quinn, Serena means it. If there's one thing that can be gleaned from the past seasons, it's that Rachel and Quinn aren't exactly down to hand over the reins to their show. So uh, best of luck to Serena.

When Zimmer spoke with The Hollywood Reporter about the forthcoming season back in June, she confirmed that the latest installment will be more The Bachelorette than The Bachelor. She told the publication,

"We have a female ‘suitress’ and it’s changing the narrative within a formula that everybody loves. It’s all these hot men, and now, not only do you have two strong women, but you have three, and it is a crazy trifecta of women wanting to help other women, but not knowing the best path."

Are you ready for this new season? Has the year-plus wait been gnawing at you? In the aforementioned THR interview, Zimmer shared a message with the series’ fans:

“I'm very sorry, just hang in there. Go to the beach, drink some margaritas, and before you know it the summer will be over, it will be fall and we’ll all be cold — kind of — and all of a sudden it will be 2018.”

The third season of the primetime workplace soap opera was renewed back in June 2016, but as Zimmer confirmed on Twitter this summer, its release was delayed until 2018. The finale of the oft-criticized second season aired in August 2016.

You can watch the trailer for Season 3 below. (R.I.P. to that man bun.)

Wait. Wait, wait, wait. Could that… is it… did he… who is this person?

Does that dude look like actor Freddie Stroma, or does that dude look like actor Freddie Stroma? Is Adam back on Everlasting? (And if that is Adam, when did he get a dragon wing tattoo on his forearm?) Or is this one of the totally new contestants? If it's an Adam doppelgänger, that'd be a ruthless move by the Everlasting casting department. How's Rachel supposed to get over him when she has to stare at a guy who looks a lot like him, ya know?

For reference, here's a picture of Adam/Stroma kicking his feet up in a box of dirt:

Perhaps this will be yet another messy chapter in Rachel and Adam’s messy love story, perhaps it’s an Adam lookalike who has been sent to the show to haunt Rachel like the Ghost of Complicated Relationships Past.

Whatever the case may be, Season 3 sure looks like a doozy.