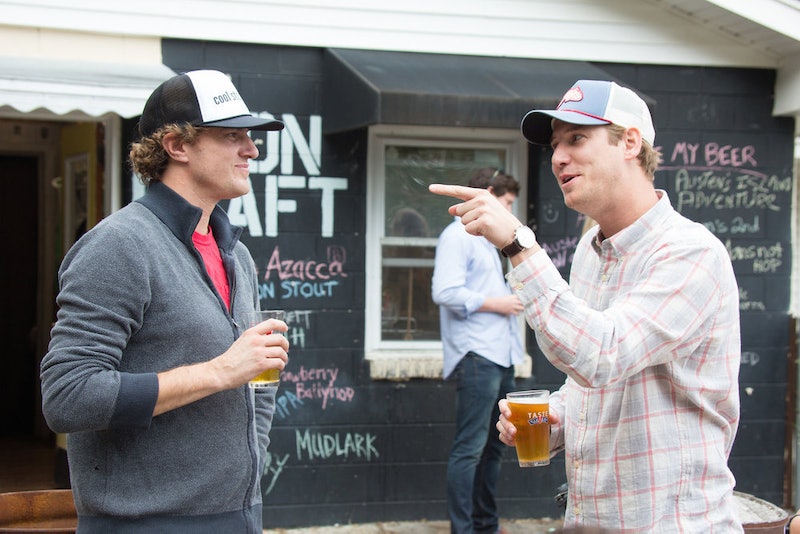 Ah, reality television doesn't pay like it used to — at least, it doesn't if you're not a Kardashian or something. Which is probably why so many reality television stars have to have a side hustle, or at least something to draw attention to when they're talking about nothing on the show. For Southern Charm's Austen Kroll, that's his beer company, King's Calling Brewing Co. He was doing testing and tasting for his new Trop Hop IPA back in Season 5, but what are the latest updates with Austen's beer company in 2019? He's still working on it, as it turns out.

When viewers first met Austen, he was working in sales for a beverage distributor. Eventually, he opted to quit his corporate role and strike out on his own — brave, right? Of course, these things take some time, and even though Austen was able to bring some of his Trop Hop beer to the Southern Charm Season 5 reunion, he admitted to Decider that it wasn't quite in cans yet. But just hold tight for a while, OK?

"It definitely is moving forward," Austen told The Daily Dish, explaining (and shading former Southern Charm cast member Landon) that he wants to make sure the company is solid before announcing it. "People's past failures on the show with them trying to start things, [like] a false website and things of that nature, [has] driven me to [be like], no, it's not going to be like that; it's happening. It has to happen because a lot of wheels are in motion," he said.

And while that Trop Hop beer is still in the works, Austen already has his eye on his next project — a beer tour company, dubbed Charleston Brews Cruise, in his home base of Charleston, South Carolina. Why? Well, it just seemed like a natural fit. Walking and drinking! What a concept! He told Bravo:

“I’m all about keeping it in the family — the beer family! I saw Charleston Brews Cruise as a great business venture and opportunity for me to give back to the local community. The tour stops at local breweries, allowing visitors and residents alike to check out the best beers the city has to offer... and who knows what Southern Charm-ers you might come across while on tour."

Bravo reports that Charleston Brews Cruise has two different tour options for your touring please — there's a day drinking one and a happy hour. Each hits up three or two different breweries, respectively, with snacks and water included, all for sopping up the brews you're drinking all day.

It's understandable that Austen's beer isn't quite off the ground yet — it can take a long time to get distributors and bottlers and sign off from all the necessary parties. Alcohol is a crowded industry, so it's smart that Austen has chosen to branch out in the touring business. After all, he has a built-in customer base with Southern Charm fans visiting the city all year long. The beer not be on shelves quite yet, but Austen is showing that he's definitely thinking long-term.

More like this
Twitter Is Overjoyed With 'The Great British Bake Off's Return
By Maxine Harrison
UK Audiences Will Soon Be Able To Watch 'The Bear'
By Frances Stewart
Here's The Full List Of Zach's Confirmed & Potential 'Bachelor' Contestants
By Kadin Burnett and Grace Wehniainen
Clayton & Susie Broke Up, Citing "A Significant Amount Of Pain" After 'The Bachelor'
By Jordyn Tilchen
Get Even More From Bustle — Sign Up For The Newsletter