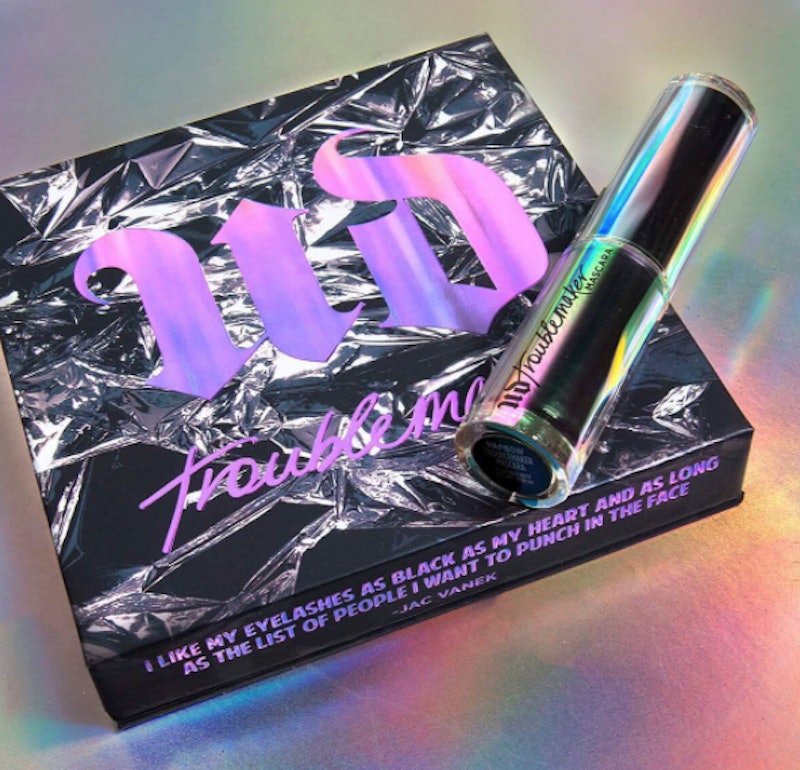 Hands down, the masterminds behind Urban Decay are some of the most hard-working beauty lovers in the business. The Urban Decay Heavy Metals holiday collection hasn't even lived out its moment and the brand is introducing yet another palette. The Troublemaker Eyeshadow Palette is launching soon, making this an incredible year of Urban Decay releases.

If it wasn't clear before, Urban has been showing out for all of 2017. You have to wonder if its beauty labs have ever cooled off because the brand has given fans one holy grail product after another. There were the Naked Skin Shapeshifter Palettes that kicked spring off with a bang. The Naked Heat Eyeshadow Palette was everything summer dreams are made of and so much more. Then, UD just had to drop the most stunning Vice lipstick shades going into the fall season.

Thanks to the soon-to-be-released Troublemaker Eyeshadow Palette, makeup lovers just may go broke before the year ends. It's only been about a month since UD's supposedly sex-proof Troublemaker mascara became a part of the brand's beauty family, and the newbie already has a sister. Yet again, Urban has taken the beauty sphere by surprise with a shiny, new piece of merch.

Trouble will soon be knocking at your door and it's in the form of a 10-shade eyeshadow palette. Featuring key neutrals and pops of rustic color, the Troublemaker palette will make its way onto virtual shelves and beauty counters in due time.

White and black shades are split in the center, surrounded by hues ranging from peachy nude to sage green. It's quite the even mix of shimmer and mattes, incased in a compact packaging with a grungy, geometric design á la UD's signature edgy style.

There's still no official word on its exact release date and how much the palette will cost, but UD has teased that it will be coming very soon. Fans of the palette likely won't have to long to wait, considering the brand usually follows up quickly with launches after giving sneak peaks.

There's no telling what to anticipate from Troublemaker's formula either. Beauty lovers can likely expect UD's usual quality from the palette's matte shades. But the shimmers could be an entirely different story.

The Heavy Metals palette introduced a new foiled formula for UD, referred to as the "creamiest, most amazing, shiny metallics" the brand had ever created. Fingers crossed that the shimmering hues within Troublemaker were graced with the same, high-impact formula.

Speaking of formulas, hopefully it's not too much to assume that Troublemaker is "sex-proof," too. After all, the UD mascara of the same name was hyped to withstand anything — even hot, sweaty sex. Urban Decay founder Wende Zomnir claimed to have tested the mascara's long-wear, sex-resistant abilities herself.

Although UD's cult-favorite eyeshadow primers are always clutch, it would be nice to have a fade-resistant shadow that didn't require a base, even if it wasn't exactly "sex proof". One could only hope.

For now, it's to be expected that the palette, like its complimenting mascara, is formulated with loads of trouble— heaping doses of confetti glitter, a splash of bad decisions, and late night texts to an ex that anyone would regret in the morning.

That may be total exaggeration. But use the palette in the right way and it's likely to bring trouble in your path. After all, it could make for some pretty sultry looks. Combined with the perfect Vice lipstick and a smoldering 24/7 Glide-On Eyeliner popped into the waterline, you could have yourself a beauty beat that spices up your look for a night where anything goes.