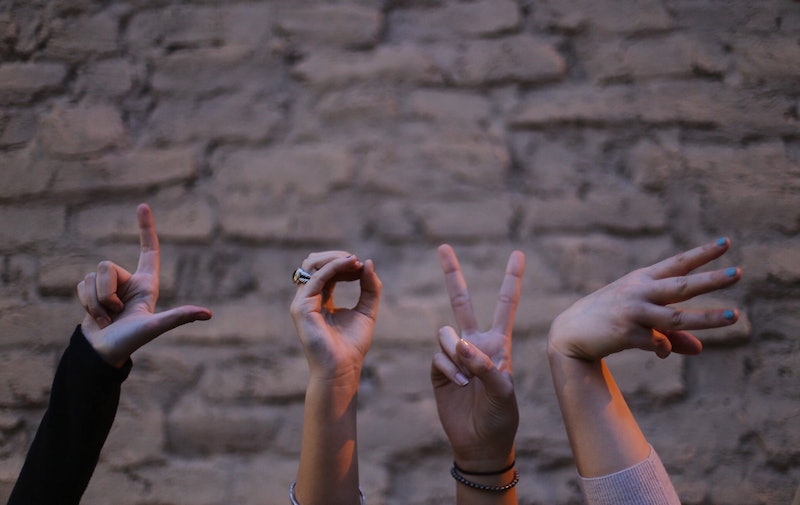 Most people agree that learning a second language of any kind is a great part of personal development. But according to recent research, learning sign language has an added benefit: It can actually improve your vision. As UK researchers explain in their paper published in the journal Frontiers of Psychology, when you learn a new language that is a visual one, your vision may also improve. This, of course, is on top of the fact that becoming fluent in a language with which a huge number of people communicate — 500,000 people in the United States use American Sign Language; 50,000 people in the UK use British Sign Language; you get the idea — can only be a good thing that helps make our world more inclusive. So, basically, anyone who's capable of learning and using sign language basically has no excuse not to learn.

The study was small, but it's still notable. First, researchers recruited three study participant groups, including people who were deaf, people who had hearing intact but knew British Sign Language, and people who could hear and did not know any sign language. Then, the participants completed computer tasks that tested their vision and response time. Unsurprisingly, the group of adults who were deaf blew everyone else out of the water.

Lead author Charlotte Codina, a vision researcher at the University of Sheffield, explained in a statement that the findings "support the common belief in sensory compensation," which is that when one or more senses are lacking, the others kick it up a gear and work extra hard and extra well.

A really interesting aspect of this study, however, is who fared second best: The hearing people who knew BSL scored significantly better than the people who did not know sign language at all. Again, it's worth noting that the study was small, and that more research definitely needs to be done in this area — but the results suggest that regardless of your hearing status, learning sign language still improves your visual-processing skills. It also supports learning sign language even if you come to it later in life.

But again, even though this added benefit is pretty cool, there are already plenty of reasons to learn sign language; it's a great way to be an ally for the deaf and hard-of-hearing community. You can also check out awesome poetry in American Sign Language, watch documentaries about the deaf and hard-of-hearing community, and find some classes in your community to learn the basics of the language.

More like this
25 Galentine's Day Games To Play On Zoom With Your Long-Distance Besties
By Mia Mercado
Everything You Need To Know About The Samsung Galaxy S23 Ultra’s New Camera
By Alexis Morillo
Samsung's New Phones Have Amazing Cameras & Come In 8 New Colors
By Alexis Morillo
Ashamed Of Your Screen Time Stats? Here's How To Change That
By Alexis Morillo
Get Even More From Bustle — Sign Up For The Newsletter
From hair trends to relationship advice, our daily newsletter has everything you need to sound like a person who’s on TikTok, even if you aren’t.