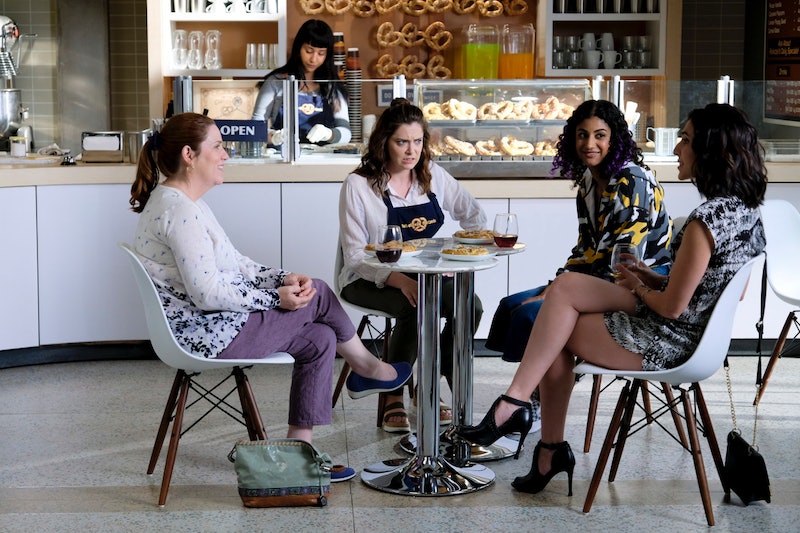 Spoilers ahead for Crazy Ex-Girlfriend Season 4, Episode 5. To paraphrase Coldplay, nobody said change was easy, but Rebecca didn't think it would be so hard. In Crazy Ex-Girlfriend Season 4, Episode 5, her friends are moving on while she's stuck in neutral. Make no mistake: she's happy at Rebetzel's, volunteering at the prison, and attending therapy, but those things pale in comparison once she learns that Heather and Valencia are becoming bona fide adults. And while Rebecca's initially upset that she's not making as much progress as her friends, her therapist reminds her that everyone changes at his or her own pace, and it's dangerous to compare yourself to others.

Rebecca learns this episode that Valencia and Beth are moving to New York, while Heather and Hector have bought a condo in El Segundo. This means that their beloved girl group is splintering apart, even though they both swear up and down that nothing's going to change (cue the sad Spice Girls music). Paula tries to convince Rebecca that leaving is a natural — if not heartbreaking — part of life. "I've said goodbye to a lot of people, and you get used to it," she says, not quite reassuringly. "You say hello, you say goodbye, and you just try to treasure the moments in between."

It's a sweet sentiment, but Rebecca has trouble processing everything she's just learned. She tells Dr. Akopian (Michael Hyatt) about these life changes, admitting that she feels competitive with her friends. "I want to cryogenically freeze all my friends to buy me some time to find a better career and life partner," she whispers as her therapist strains to hear her. "And then, when I'm ready, I'll wake them up, and I'll throw a party for all of our mutual milestones." Dr. Akopian assures her that it's normal to feel this way, pointing out that her friends are just moving at a different pace than her. While she means this to be reassuring, Rebecca, as usual, takes this the wrong way, and decides to replace Heather and Valencia with younger millennial friends Maya (Esther Povitsky) and AJ (Clark Moore), who do things like ironically scrapbook.

However, Valencia and Heather aren't the only ones whose lives are in flux. Darryl and White Josh are in denial about their breakup (and so are their friends, if that musical number didn't tip you off). Even Paula, who just hours before gave Rebecca such sage advice, freaks out when she's faced with her own life upheaval. She learns that her deadbeat, drug-dealing son Brendan (Zayne Emory) has, against all odds, joined Peace for Peeps and is leaving the nest. Mama Bear is left with the realization that her eldest is actually the mature young man she's always wanted. The song she sings as Brendan packs up his messy room filled with knives and pentagrams is both mean-spirited and sweet, unsupportive and loving.

Everyone on Crazy Ex-Girlfriend is petrified by the changes awaiting them. While Heather and Valencia are excited about their big moves, they know deep down that their lives will never be the same. And while it may take Rebecca some time to adjust to two of her best friends moving away, she finally accepts it by the end of the episode. After she ruins their goodbye party by inviting her new friends over, she apologizes for being such a dunce.

And while Paula, Valencia, and Heather are pissed at her, they point out that they'd never be where they are today — graduating from law school, dating Beth, and married to Hector, respectively — without Rebecca. So while she may feel stuck in limbo, she's learning to celebrate her friends' successes. Besides, when you think about just how far she's come since Season 1, she's arguably made more progress than anyone. Using others as a yardstick for her own growth only minimizes what she has achieved, and it goes without saying that success looks different for everyone.

So yes, it's going to be painful for these four women to say goodbye, but they've also had an irrevocably positive affect on each other, and that's worth holding onto. Maybe Paula was right after all: You say hello, you say goodbye, and you just try to treasure the moments in between.

More like this
Did 'Grey’s Anatomy' Just Drop A Major Taylor Swift Easter Egg?
By Grace Wehniainen
'School Of Rock' Changed Joe Keery's Life Forever
By Alyssa Lapid
Everything To Know About Taylor Swift’s 10th Studio Album, 'Midnights'
By Grace Wehniainen and Jake Viswanath
Is Dua Lipa Dating Trevor Noah? New Photos Show Them Kissing & Hugging
By Brian Anthony Hernandez and Martha Sorren
Get Even More From Bustle — Sign Up For The Newsletter