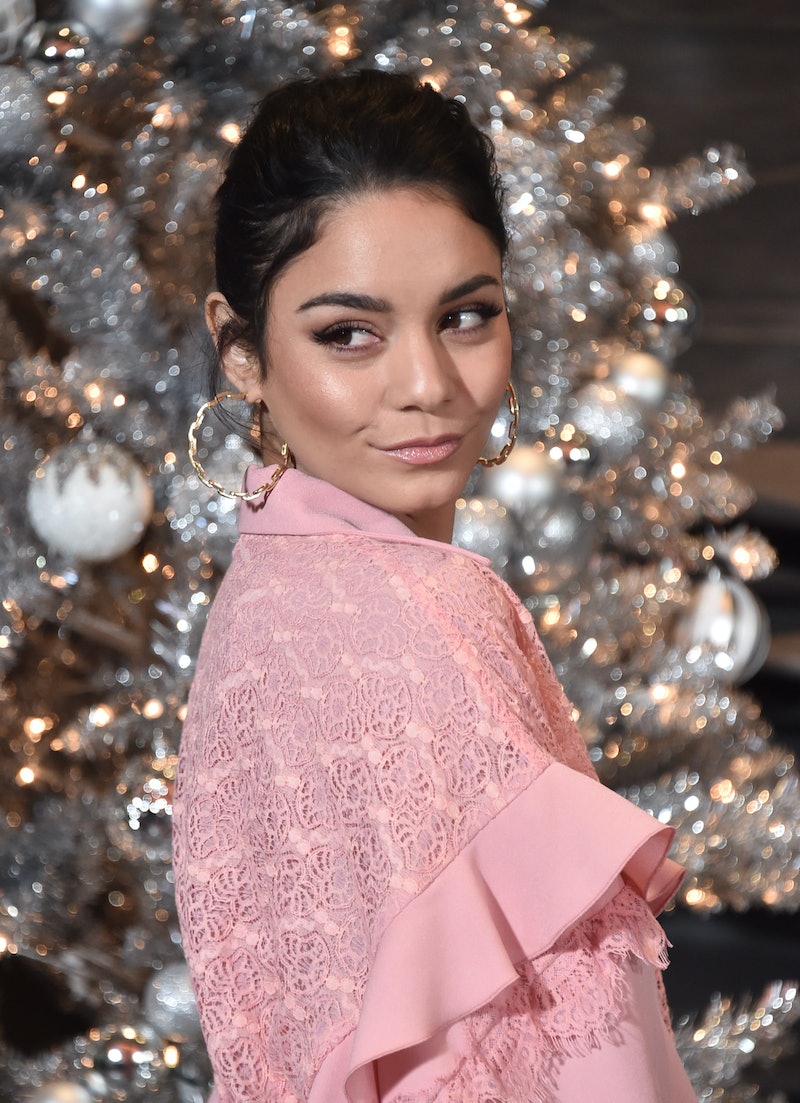 The words “splashy holiday rom-com” generally evoke visions of wild set-pieces involving tree-toppling hijinks, royal identical twin switcheroos, or whatever other wacky nonsense Netflix, Hallmark, and Freeform have in store for us this year. But there is one holiday rom-com this year, hitting the big screen Dec. 21, that earns both the splashy holiday title and manages to be genuinely sweet and heartfelt: Second Act. The Jennifer Lopez rom-com, about a 40-year-old woman who lands a dream corporate job using “street smarts” rather than an expensive college degree, has a hell of an emotional twist and a message that would be cheesy if it weren’t so damn true. But for Lopez’ co-star Vanessa Hudgens, the film carries some personal significance, as well.

Hudgens’ character, Zoe, is billed as Maya’s (Lopez) rival at the outset of the film, when Maya first gets a big fancy job at Zoe’s father’s company, but as is the case with any good feel-good movie, the more we learn about Zoe, the less mean she seems. But giving a leg up to Second Act over other women-butting-heads-at-work plots is the fact that it wastes no time letting audiences know that Zoe isn’t just ruthless. She’s trying to protect her father, and his company, following the recent loss of her mother, something Hudgens says kept her from making the rivalry scenes too cruel because, for better or worse, she’s got some experience with that feeling. In 2016, Hudgens famously dedicated her performance in Grease: Live! to her father, who passed away after a battle with cancer shortly before the production was to air. Now, she says, that loss helped her understand Zoe’s perspective in Second Act.

“Being not the friendliest with J.Lo was horrible. I hated it,” she says with a laugh. “But [I just came] from an authentic place, being that my character is someone who has sacrificed her real passion and dream, which is photography, to be there for her father in the loss of her mom. And I mean, I lost my dad a few years ago and I would do anything to help out my mom and keep her safe and happy.”

Fortunately, Hudgens’ personal connections to the new movie weren’t only unhappy ones. The actor (who admits she used to watch Lopez’ classic rom-com The Wedding Planner “on repeat” when she was younger) says that working with Lopez was pretty much the dream. “I remember just reading the script and being like, 'Oh my God, yes, Jennifer Lopez in a rom-com again.' That made me so excited because it's been a minute since we've gotten that and I feel like she's the queen at it. She's so charming and lovable. You can't help but love her on camera. She's just magnetic.”

And while the saying goes that you shouldn’t meet your idols, for Hudgens, the Lopez she met on set was nothing short of an inspiration. “We connected on such a deep level,” she says, teasing the film’s huge — and yes, completely emotional — twist. To boot, though, Hudgens was also enamored with Lopez’s work ethic. “She's just on it. I've never seen a woman work harder before in my life,” says Hudgens. “She does 10 million things all at the same time. She really has her hands in the dirt, like really in the trenches, getting things done.” Pretty on brand for a film about a woman who works her way up the corporate ladder by any means necessary, no?

And on that note, Hudgens hopes audiences take something a little personal away from the film as well — yes, we’re bringing it back to that cheesy-if-it-weren’t-so-true theme. “[The movie] also makes you just kind of self reflect a little bit,” she says, referring to the film’s message about making your own success and getting out of your own way.

Self-reflection, heightened emotions, and a major twist? Yep, sounds like the holidays to me.

More like this
At 28, Rosie Perez Risked Her Career To Stop Playing Stereotypes
By Gabrielle Bondi
'That '90s Show' Star Callie Haverda Got Advice From Mila Kunis & Ashton Kutcher
By Brad Witter
Austin Butler Confirms Vanessa Hudgens Pushed Him To Do 'Elvis'
By Alyssa Lapid
Vanessa Hudgens Shades Austin Butler's Elvis Accent With One Word
By Alyssa Lapid
Get Even More From Bustle — Sign Up For The Newsletter
From hair trends to relationship advice, our daily newsletter has everything you need to sound like a person who’s on TikTok, even if you aren’t.