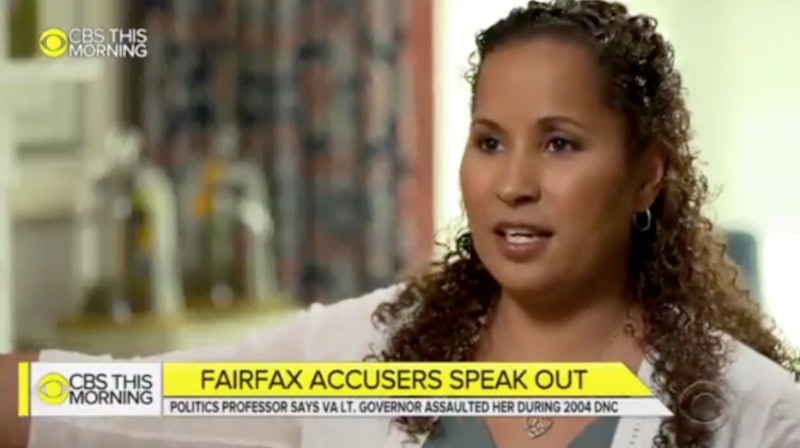 It's been nearly two months since a woman accused the sitting Virginia Lt. Gov. Justin Fairfax of sexual assault in an allegation he has denied. In an emotional Monday interview with CBS This Morning's Gayle King, Vanessa Tyson addressed her sexual assault allegation against Fairfax, sharing new details about the alleged incident. She first went public with her allegation in early February, when it appeared that Fairfax was poised to take over Virginia's governorship.

Warning: This article contains information about sexual assault, which some may find triggering.

Tyson, a politics professor, told King that the pair met at the 2004 Democratic National Convention (DNC) in Boston. After learning that the two had a mutual friend, she said, she felt comfortable chatting with him. Bustle has reached out to Fairfax for comment.

"I certainly felt he was harmless," Tyson said in the interview. "There were no red flags that suggested to me that he was a threat."

Fairfax has vehemently denied Tyson's allegations. "I take this situation very seriously and continue to believe Dr. Tyson should be treated with respect," Tyson said in a statement provided to Bustle in February. "But, I cannot agree to a description of events that simply is not true."

Tyson told King that about 48 hours after meeting him at the convention, Fairfax asked her if she wanted to run an errand with him "and get a bit of fresh air and sunshine." She accompanied him to his hotel where, she said, he needed to retrieve some papers.

According to Tyson, Fairfax did grab some papers while the two stood in his hotel room. Then, she said, he turned around, walked up to her, and started kissing her. Tyson told King that the kissing was consensual, as she has said in previous statements about the alleged encounter.

While they were kissing, Tyson said, Fairfax led her to the bed, where the two continued to kiss. She said the interaction was consensual until she felt some pressure at her neck and felt unable to move her head. Then, she alleged, Fairfax forced her head down to his crotch and made her perform oral sex on him.

At this point in the interview, Tyson grew visibly upset. Through tears, she told King that she was taken aback at the turn the alleged encounter took.

In a statement to Bustle in response to Tyson's CBS interview, Fairfax says:

I, for one, stand accused of crimes that I did not commit.

I feel so strongly regarding my innocence that I submitted myself to polygraph tests for each of the accusations against me. I passed those tests because, as I have maintained from the very beginning, I did not assault either of my accusers.

I have also called for a fair, full, and impartial investigation of the allegations and my denials. I am completely confident that such an investigation would exonerate me and clear my good name, which I have spent a lifetime building.

At the time, Tyson said, she was working at the Boston Area Rape Crisis Center. She described that work as "the biggest part" of her life at the time. She also told King that she had shared with Fairfax that she was an incest survivor, and said she believed, in retrospect, that Fairfax had taken advantage of her, in light of her past.

When asked why she was coming forward and what she wanted to happen to Fairfax, Tyson's response was simple. "I'd want him to resign," she said.

Tyson's allegation came a time when Virginia's top political leadership were all embroiled in scandal, and it appeared very possible that Fairfax might ascend to the governorship as part of the fallout. Fairfax has said that he and Tyson had a sexual encounter, but claimed the incident was "consensual," according to Axios.

Although the allegation against Fairfax received significant attention when Tyson first went public, there have been few updates in the time since. Fairfax has said that he will not step down from his position as lieutenant governor, The Daily Beast reported, citing his right to due process.