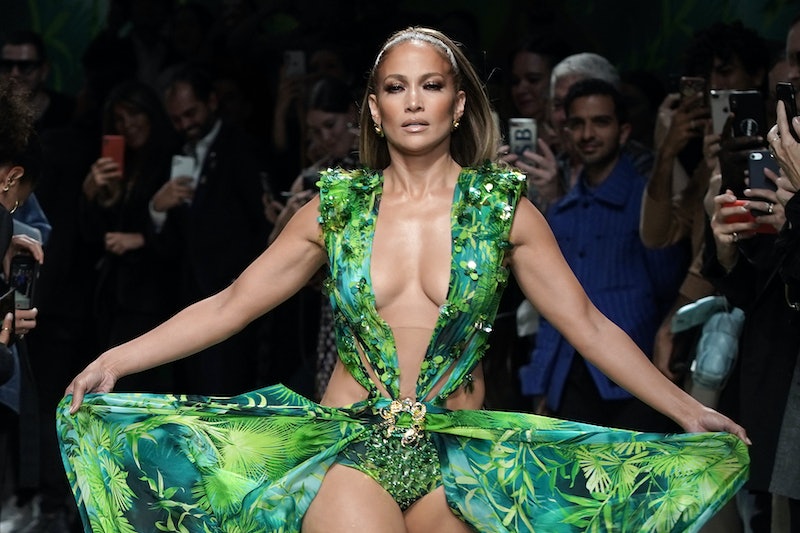 In the history of iconic fashion moments, Jennifer Lopez's Versace Grammys dress certainly left its mark. Fashion Nova appears to think so, too. The fast-fashion brand has created an alleged replica of J.Lo's Grammy gown, and Versace is taking action against the brand for it.

According to TMZ, the legendary fashion house has filed suit against Fashion Nova alleging that the brand recreated Lopez's famous green, palm-printed gown from the 2000 Grammy Awards. The Fashion Nova dress in question, named the Love Don't Cost A Thing dress, was reportedly designed for Halloween costumes. However, Versace has still filed a complaint against the LA-based clothing brand.

TMZ reports that the label filed suit citing Fashion Nova as infringing upon copyright in order to make "knock-offs" of their designs. According to the publication, Versace lists famous names it has dressed in a seeming attempt to differentiate its status from that of Fashion Nova. The label is allegedly asking for all of the profits from sales of the Versace-inspired designs (it claims there's more than just J.Lo's famous dress) and to stop further items from being produced.

Bustle has reached out to Versace and Fashion Nova for comment regarding the lawsuit. As of press time, neither company has responded.

Update: Fashion Nova responded to Bustle's request with no comment.

Versace's lawsuit isn't the first time Fashion Nova has come under fire for producing alleged replicas of famous looks. Back in February, Kim Kardashian West also criticized the brand when it created an alternative to her daring Thierry Mugler cut-out dress.

According to Kardashian West, the Mugler piece was a vintage 1998 design that was a one-of-a-kind creation making the recreation especially upsetting to the star. The KKW Beauty owner took to Twitter in order to call out Fashion Nova. In a series of tweets, Kardashian West explained that she can plan her ensembles for months in advance and cherishes the relationships she was with them. Stating that she can "no longer sit silent," Kardashian West tweeted, "It’s devastating to see these fashion companies rip off designs that have taken the blood, sweat and tears of true designers who have put their all into their own original ideas."

In a statement to Bustle at the time of Kardashian's criticism, Fashion Nova explained that it has no relationship with Kardashian but is "driven by her influential style."

Fashion Nova's alleged recreation of Lopez's dress may have been listed as a nostalgic Halloween costume, but it also came on the heels of the gown's resurgence in the news. In September, Lopez walked the Spring 2020 runway show for Versace in a recreation of her famous gown. The singer and actor closed the label's show, walking part of the runway with designer Donatella Versace herself. Needless to say, the internet loved it.

Based on the brand's earlier statement to Bustle regarding Kardashian West's Mugler gown, Fashion Nova seems to take inspiration from major fashion moments and icons like Jennifer Lopez and her Versace gown, but with the lawsuit from Versace, the brand may be forced to reevaluate its design strategy.