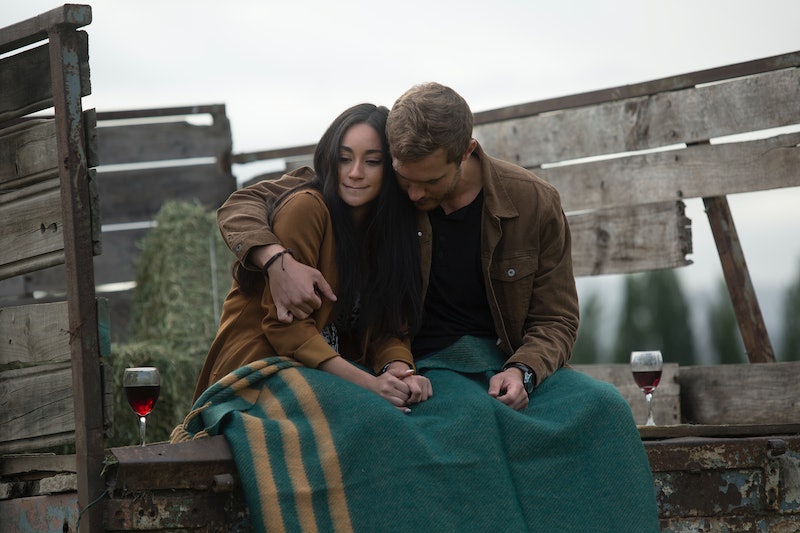 Despite promising to work on trust and communication, the road to romance hasn't gotten any smoother for this Bachelor couple. In a sneak peek published by Entertainment Weekly ahead of the Feb. 24 episode, Victoria F. and Peter's Fantasy Suite date devolves into an argument, as they attempt to work through their communication issues during dinner. And, spoiler alert: this also ends with Victoria in tears.

During their disastrous hometown date on the most recent episode of The Bachelor, Peter confronted Victoria about her habit of pushing him away whenever she felt anxious about their relationship, rather than working through issues with him. However, they seemed to reach a turning point when Victoria came to Peter's hotel room and confessed that she was "falling in love" with him, and promised to work on opening up to him. In the new preview, it seems like she is ready to make good on that promise, telling him as they sit down to dinner that they need to work on their communication. "So, I want you to tell me what I need to give you," she says.

In response, Peter tells her that he needs "that 100 percent confidence in knowing that I can always count on you." All of that is well and good, until he brings up the fact that Victoria has "tried to push me away," and asked to explain why. "I don't know. I just question everything, I guess," Victoria replies, and when Peter attempts to continue the conversation, she cuts him off. "I don't know what you want," she tells him, despite Peter's previous statements.

The pair's relationship has been difficult since the beginning of Peter's time as The Bachelor, with Victoria almost quitting after the fashion show group date, and even running away in tears after confessing that she used to date country star Chase Rice. Then, after a tense one-on-one date in Chile, Peter admitted that he had "doubts" about Victoria, and that he feels like he's more invested in their relationship than she is. "Nobody else has put me through anything like this," he told her at one point.

While many members of Bachelor Nation have criticized Peter for continuing to keep Victoria around, despite all of the drama and arguments, he has frequently defended his choices and their relationship. "All I can speak on is the time I was able to spend with Victoria throughout this experience," he said on Feb. 4, after Cosmopolitan decided to pull the Bachelor cover that featured Victoria. "And I truly enjoyed my experience with her. I really feel like she’s a good person. She’s got a lot of endearing qualities."

Peter isn't the only person who has defended his relationship with Victoria to fans; in a recent interview with Us Magazine, Chris Harrison explained that Peter and Victoria's relationship is "volatile" but relatable. "It’s one of those relationships, I see it often on the show, and you see it in life, where there’s passion, there’s chemistry, but it’s so volatile," he explained.

Based on the preview for their Fantasy Suite date, it seems like the volatility of Peter and Victoria's relationship might finally outweigh the passion and chemistry.