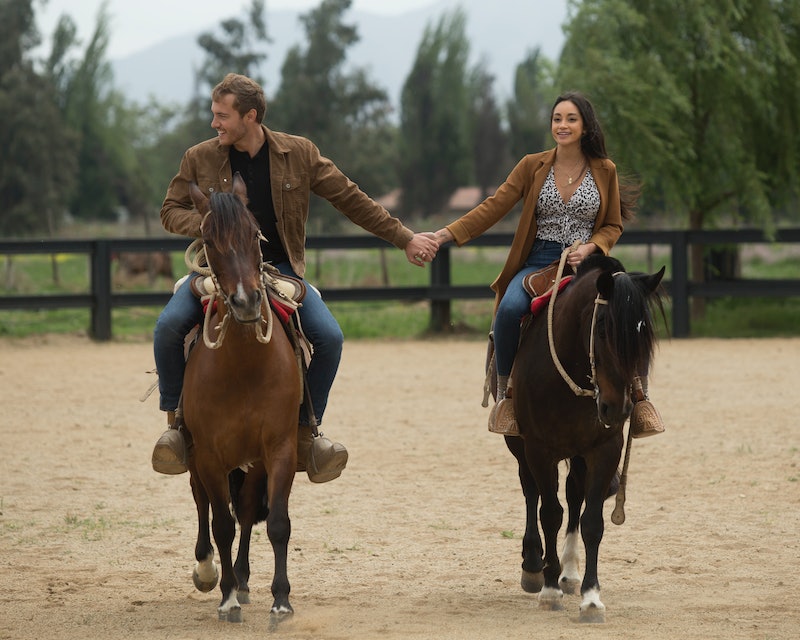 Wherever Peter Weber and Victoria F. go, drama seems to follow — and her hometown date proved to be no exception to that rule, much to the annoyance of fans. However, Victoria F.'s post-hometown date Instagram message to Peter indicates that she was grateful that the Bachelor decided to look past any drama and — spoiler alert — give her a rose straight to the fantasy suites. Drama be damned.

"Thank you Pete for always having faith in us & believing in me, even when I would doubt myself along the way," Victoria posted to Instagram on Monday, Feb. 17, alongside two photos of her and Peter together during his brief trip to Virginia Beach. (Peter himself has yet to comment on the post.) The images highlight the surprisingly good day the two of them had together before things began to fall apart. As viewers saw, towards the end of their hometown day date Peter ran into his ex-girlfriend Merissa Pence, who warned him about Victoria and claimed that several relationships in the area had "ended" because of her, though she didn't provide any further details.

Naturally, Peter wanted to discuss what he'd heard with Victoria herself. But when he brought it up right before stepping into her home to meet her parents, she immediately became defensive, which spiraled into a full-blown fight that culminated in Peter leaving without actually meeting her family.

“I knew who Victoria was, as far as her reputation, but I honestly didn’t know that she had done as much damage as she had done to our hometown,” Merissa claimed during a recent chat with Us Weekly about why she confronted her ex about Victoria. "I knew Peter, I know his family and I know what type of person he is. So I just felt like, if anyone were to say something, I felt like he probably would listen to me versus some random girl.”

Victoria has yet to comment about Merissa's allegations since the episode aired. Bustle reached out for comment, but did not receive an immediate response. However, she did post a cryptic message on Instagram back in November 2019 that seems to reference the drama, claiming that the "rumors" that were circulating about her were false. "There will be a time & place where I can defend myself, but for now I choose to wait," she added.

Victoria also told Peter outright during hometowns that she was "disgusted" that he had brought the topic up to her, believing that it meant he was taking Merissa's side. However, when she went to visit Peter's room the next day and told the pilot she was "falling in love" with him, he opted to ignore all of the red flags and gave her a rose anyway. Hence, Victoria thanking him on Instagram for "believing" in her.

Fans haven't always agreed with Peter's decision this season. In fact, he's had to defend his choices on numerous occasions and even came to Victoria's defense after Cosmo opted to pull their Bachelor digital cover. Obviously, when Victoria says Peter has faith in their relationship, she means it. These two can't seem to stay away from each other. Whether that ends up working out to their benefit or detriment, remains to be seen.