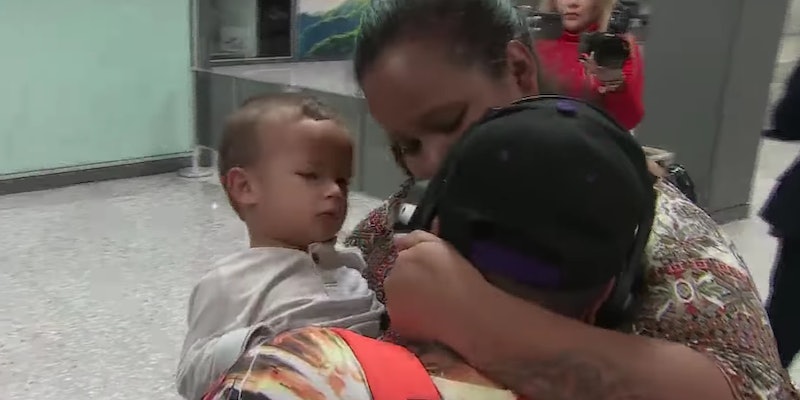 Over the weekend, a tear-filled video of a separated mother reuniting with her son highlighted the human impact of the Trump administration's hardline immigration policy. The 11-year-old boy had been detained for six months after attempting to claim asylum at the U.S.-Mexico border, according to CBS.

The boy's mother, Karen Yadira Rodriguez Gutierrez, had already been living in Virginia as a legal asylum seeker, according to CBS. But when the boy crossed the U.S. border in California, accompanied by his grandmother, who is undocumented, Immigration and Customs Enforcement (ICE) reportedly took the pair into custody. The two were detained together for a few days, according to CBS, though they were ultimately separated.

The mother and son had not seen each other for several months, and were not reunited until after Gutierrez filed a lawsuit against the Trump administration, CBS reported. Viral video footage shows the pair's emotional meeting at the Washington Dulles International Airport. In the video, Gutierrez is seen embracing her son and sobbing loudly as she hugs her son tightly.

Their reunification is one of the most recent examples of how the Trump administration's so-called "zero-tolerance" immigration policies have impacted undocumented immigrants coming into the United States.

Undocumented immigrant families began to be separated at a rapid rate after the Trump administration announced earlier this year that it would implement a so-called "zero-tolerance" immigration policy against those unlawfully entering the United States. The administration has since walked back aspects of its hardline policy, but not before thousands of children were removed from their accompanying adults.

Logistically, the separations occurred because Trump officials swore to prosecute all unlawful border crossings. Because children could not be held in jail, they were separated from their families and held elsewhere, sometimes in cage-like facilities which critics dubbed to be "baby jails."

The family separation crisis sparked widespread outrage, both within and outside of the United States. And as evidenced by this weekend's viral video, the after effects of the policy are still being felt while the government works to reunite those children whose families have been difficult to contact in the months since the bulk of separations took place.

Unfortunately, Gutierrez's reunification story is not the only one of its kind. For months, footage of tear-filled family reunifications have spread across the internet, underscoring that the Trump administration's tough stance on immigration can carry very real consequences for those on the ground.

At the end of August, nearly 500 children remained in government custody, according to The Washington Post. The majority of those children reportedly had parents who had been deported during the early days of the zero-tolerance immigration policy. In some cases, The Post reported, the contact information on file for a child's parent is incomplete or incorrect, meaning that making contact with a guardian can sometimes be difficult, or even impossible. And as time wears on, those children continue to remain in the United States, without a clear idea of when they might see their parents again. Though the "zero-tolerance" policy did not remain policy for long, its impact has been long-lasting.