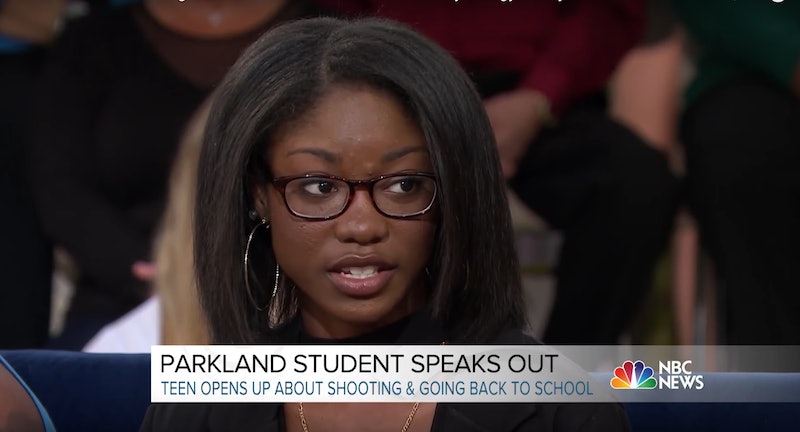 On Friday, Parkland survivor Aalayah Eastmond testified at Brett Kavanaugh's confirmation hearing in front of the U.S. Senate, and revealed in gut-wrenching detail what it's like to experience a school shooting. The video of her testimony is incredibly powerful: Sen. Cory Booker tweeted it out later in the day and said that it moved him to tears.

Six months after a gunman killed 17 people at Marjorie Stoneman Douglas High School in Florida, Congress has yet to pass any significant gun control legislation. Several of the survivors of that shooting have gone on to become high-profile anti-gun violence activists, and on Friday, Eastmond became the first of them to testify in front of the U.S. Senate.

Eastmond began by describing the harrowing experience of watching a former classmate get shot and using his dead body as a shield.

"When he fell over, I fell with him. I then placed myself underneath his lifeless body," Eastmond said. "Placing his arm across my body and my head underneath his back. Bullets continued flying. I kept my eyes on the ground so I knew when to hold my breath and close my eye when the shooter got near."

She continued, talking about what was going through her mind as she awaited what she believed to be certain death.

"I began talking to God," Eastmond said. "I told God that I knew I was going to die, I asked to please make it fast. I didn’t want to feel anything. I asked for the bullet to go through my head so I wouldn’t endure any pain. I laid there for about 30 seconds still protected by his lifeless body, waiting for the shooter to move onto the next class."

Eastmond was speaking at a Senate Judiciary Committee hearing regarding Kavanaugh's nomination to the Supreme Court. In 2011, Kavanaugh dissented in a key gun control case that ultimately resulted in two Washington D.C. gun laws being upheld.

"Handguns and semi-automatic rifles are weapons used for hunting and self-defense," Kavanaugh explained at his confirmation hearings. "That’s what makes this issue difficult." (The ruling in question did not concern handguns, however).

After she finished describing her experience surviving the Parkland massacre, Eastmond noted that Kavanaugh, during his hearings, pointedly refused to shake the hand of a man whose daughter was killed in the shooting, and suggested that this was an indictment of his character and willingness to serve the best interests of the American people.

"As you make your final decision, think about it as if you had to justify and defend your choice to those who we lost to gun violence," Eastmond told the Senate. "If Kavanaugh doesn't even have the decency to shake hands with the father of a victim, he definitely won't have the decency to make life changing decisions that affect real people."