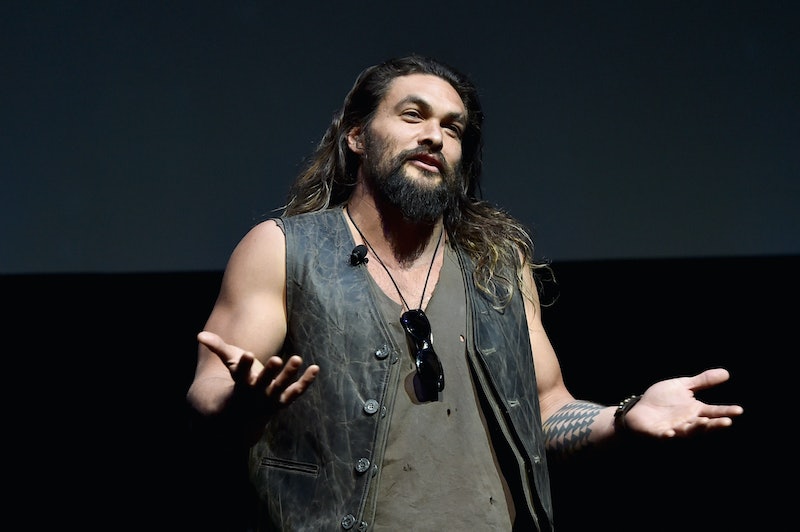 After the New York Times and The New Yorker brought to light three decades of sexual assault and harassment allegations against Harvey Weinstein, other men in Hollywood are being called out for their apparently flippant attitude towards sexual assault. (Weinstein's representatives have since stated, "Any allegations of non-consensual sex are unequivocally denied by Mr. Weinstein.") The latest celebrity to be called out is Jason Momoa, whose 2011 Game of Thrones rape joke appeared to make light of the brutal sex scenes on the show. Particularly those involving co-star Emilia Clarke. But as upsetting as the joke itself was, the response to the joke is almost worse. (Bustle has reached out to Momoa for comment on the controversy, but has not heard back.)

UPDATE: Later on Thursday, Momoa posted an apology to Instagram, writing, "I am still severely disappointed in myself at the insensitivity of my remarks that day." The full post reads:

"I awoke in Australia to the justified reactions by many people to a distasteful joke I made years ago in Hall H for which I am sorry. I am still severely disappointed in myself at the insensitivity of my remarks that day. I know my sincerest apology now won't take away those hurtful words. Rape and sexual harassment can reach anyone and I have seen first hand its painful torment among members of my own family and friends.

I made a truly tasteless comment. It is unacceptable and I sincerely apologize with a heavy heart for the words I said.

EARLIER: At San Diego Comic-Con six years ago, Momoa, who played Khal Drogo, talked about how much he loved the boundaries that the sci-fi and fantasy genre pushes. "I love that there’s so many things you can do," he said in a clip that resurfaced on Twitter on Thursday. "Like rip someone’s tongue out of their throat and get away with it… and rape beautiful women.” The comment immediately had his fellow panelists — like creators David Benioff and Dan Weiss and Cersei actor Lena Headey — covering their faces while the crowd laughed. Momoa seemed to play it up, hiding his face behind his jacket after saying, "Next question" with a grin on his face.

These kinds of "jokes" exemplify rape culture and shouldn't be simply overlooked — let alone laughed at by a wide audience. The fact that the audience found the idea of non-consensual sex somehow funny is not only upsetting, it glosses over the reality of rape, even within a fictional world. And, unfortunately, this wasn't the only time Momoa spoke lightly of rape, however unintentionally.

In a 2011 interview with New York Daily News, the actor talked about how hard the sex scenes in Game Of Thrones are because of how rough he had to get with his co-star Emilia Clarke. "It was very hard because I've never done that to anyone," Momoa said. "I was like, 'The good news is I'm not a rapist.' It didn't feel good — I don't like women crying when I'm making love to them." The actor was not the only one who was open about how difficult creating these problematic scenes was — Clarke also spoke on that issue when she told MTV in 2011 that Game Of Thrones sex scenes were "scary" and that Momoa helped her get through this difficult scenes by making her feel more at ease. However, there is an issue with his pairing of "making love" and the act of rape as the same thing. Though likely unintentional, that phrasing contributes to the lack of understanding of what rape is.

That said, behind the scenes, it's clear that Momoa was a supportive scene partner. He told MTV in 2011 that, "it's one of the hardest things I've ever had to do, because I love Emilia, she's someone that I love and adore to this day. You have to kind of separate [yourself from] it." And others have noted that, in 2014, Momoa drew attention to the issue of sexual assault on Native American reservations. In his directorial debut Road To Paloma, he addressed how non-natives were committing crimes like rape without any consequences due to loopholes in the legal system. So, yes, Momoa may be an ally, but that doesn't mean he always says the right things. His "joke" from 2011 perpetuates rape culture and that needs to be addressed even six years after the fact.

If anything, it's especially important that "good" men get called out for these comments so that we can put a stop to them. No one should get a pass because they're famous or it was years ago or it was just a "joke." As one person on Twitter noted, "Everyone laughing after Jason Momoa jokes about rape is rape culture. That laughter is why victims don't come forward."

So, yes, it was six years ago, but making excuses for Momoa — who, in that time, has not commented on the joke — doesn't solve the real problem here: women's bodies aren't being respected when people laugh at the thought of someone taking advantage of them. Momoa isn't the only one who's made a comment like this and has been able to brush it off as just a joke. This is a bigger problem that we should take seriously, and, if Momoa is an ally, he will, too.