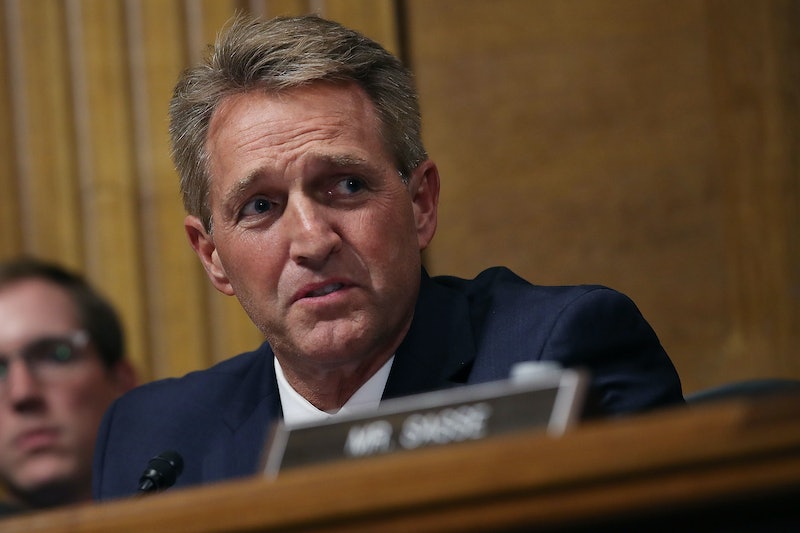 One day after Christine Blasey Ford and Brett Kavanaugh testified before the Senate Judiciary Committee, the committee's Republican majority voted to advance Kavanaugh's nomination to the full Senate. However, after a flurry of meetings outside the chamber, Arizona Sen. Jeff Flake suggested he would not support Kavanaugh's final confirmation to the Supreme Court until the FBI investigates the sexual assault allegations against Kavanaugh. Right after Flake finished speaking, Chairman Chuck Grassley abruptly adjourned the meeting, and Flake's reaction revealed how confusing the moment was.

The Senate Judiciary Committee met on Friday, the day following Ford and Kavanaugh's respective testimonies, in which she reiterated her claim and he denied her allegations. Ultimately, the committee voted 11 to 10 to move Kavanaugh's nomination forward following a contentious morning discussion. But the events leading up to the vote prompted widespread confusion.

Earlier in the day, multiple Democrats walked out of the chamber in protest after Republicans declined to delay the vote. Then, by the time the vote was scheduled to take place, committee Democrats still had not returned to the chamber, and were reportedly engaged in discussions with Flake. He had announced on Friday morning that he would vote in favor of Kavanaugh's confirmation as a member of the Judiciary Committee, but in a last-minute condition just before the vote, Flake proposed a delay in the Senate vote.

The senator asked to push the vote "up to but not more than one week," saying it would be "proper" in order to give the FBI enough time to investigate the allegations against Kavanaugh. Flake also appeared to suggest that he would not vote for Kavanaugh in the Senate-wide vote if this condition was not met, though he did not explicitly say this. Just after he finished speaking, Grassley suddenly ended the hearing, causing Flake and California Sen. Dianne Feinstein to react with confusion.

Citing a "two-hour rule," Grassley used his gavel to adjourn the session, and before the senators' microphones were turned off, Feinstein could be heard saying, "What?"

"We had to get this all done by 2 o'clock," Grassley told Feinstein, after repeating the phrase "two-hour rule" multiple times. Grassley appeared to be referring to Senate Rule XXVI, which indicates that no Senate committees or subcommittees can meet for longer than two hours or past 2 p.m. while the full Senate is in session, unless the Senate gives its permission for the meeting to continue.

Feinstein then asked Grassley what would happen next — if Flake's call for an FBI investigation would be taken into consideration, and when the Senate vote would be.

"We didn't have a motion," Grassley said. "This is all a gentlemen and women's agreement."

Flake has been and will continue to be a key vote in Kavanaugh's confirmation. Although he is a Republican, Flake is not planning to run for reelection, The New York Times reported, giving him a bit more leverage. Prior to Friday's committee vote, two women confronted Flake as he walked into an elevator. They told Flake that they were survivors of sexual assault, and challenged his decision to vote in Kavanaugh's favor.

"I was sexually assaulted and nobody believed me," one of the woman told Flake, as he looked on in silence. "I didn't tell anyone, and you're telling all women that they don't matter, that they should stay quiet."

Although Flake later called for a delay in the Senate-wide vote, it is ultimately up to Senate Majority Leader Mitch McConnell to decide when the final confirmation vote will take place, and only Donald Trump can call for the FBI investigation. Trump indicated on Friday that he was open to involving the FBI, according to CNN; he said that senators needed to do what they felt was right, but that he had not considered replacing Kavanaugh as his Supreme Court nominee.