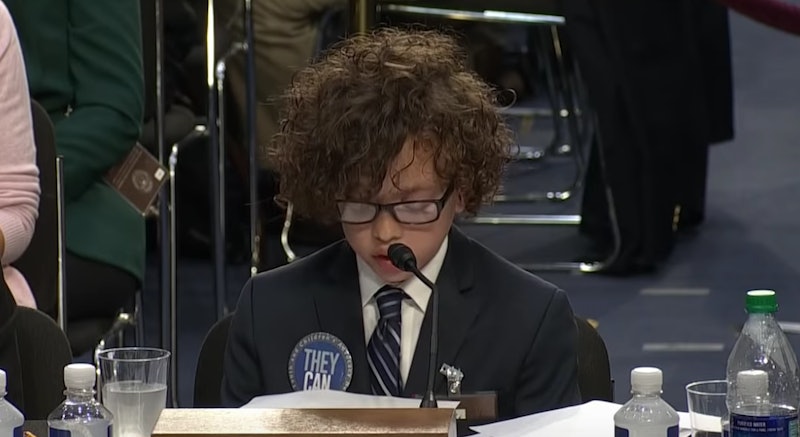 First, Jackson Corbin, a 13-year-old from Hanover, Pennsylvania, spoke about his genetic condition, Noonan syndrome — which also affects his mother and brother. He spoke about how their conditions changed his every day life. Corbin’s family is reliant on the Obama-era Affordable Care Act, he said. He testified that he, children like him, and the rest of America, deserved to have justices on the Supreme Court who would support it.

Corbin detailed how his condition affects his day-to-day, emphasizing that pre-existing conditions affect many Americans just like him.

"I am privileged to represent 130 million people with pre-existing conditions today, and I am grateful for the invitation to testify before you," Corbin said. "If you destroy protections for pre-existing conditions, you leave me and all kids and adults like me without care and without the ability to afford our care. All because of who we are. We deserve better than that."

Next up, was Hunter LaChance, a 15-year-old from Kennebunkport, Maine, who has asthma. He talked about Kavanaugh’s past environmental rulings and how they affected people like him.

He held up a small straw used to stir coffee, and encouraged those before him to try to breath through straws like it if they had them in front of them in their coffee cups. LaChance asked them to imagine what it would be like to only be able to breathe through that sized hole for an hour, a day, or a week.

"This is what it's been like during an asthmatic attack," LaChance said. "Unfortunately, I'm not alone in having asthma impact my life... I'm here today because my future and my health may depend on it. I'm deeply concerned that if Judge Kavanaugh is on the Supreme Court, he would vote to weaken laws that protect my health. Because he already has."

LaChance referenced an opinion Kavanaugh wrote while he worked on a federal appeals court in 2012. The court decided to overturn a federal cross-state air pollution rule that regulated air crossing state lines, The New York Times reported at the time.

"During his time on the D.C. Circuit Court of Appeals, Mr. Kavanaugh has repeatedly struck down other clean air act protections," LaChance said during his testimony. "This worries me a lot because clean air is a life or death issue for so many people — like me. We need a supreme court that will protect clean air because lives depend on it."