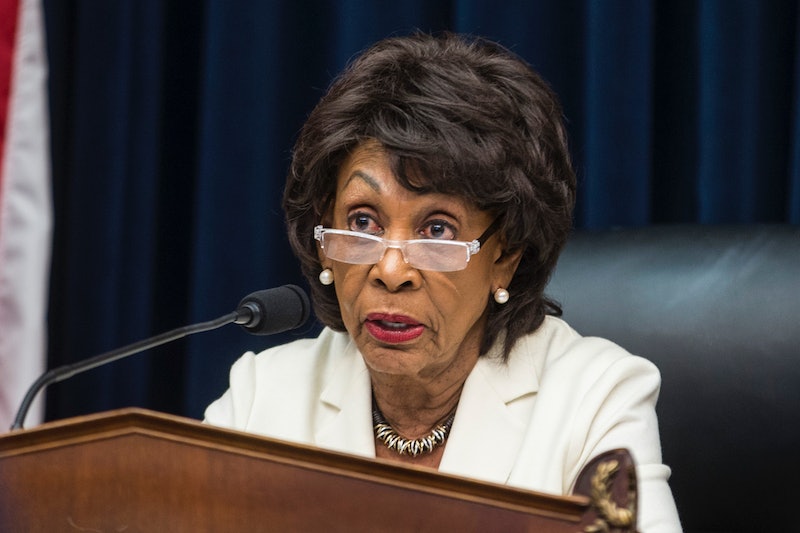 A House Financial Services Committee hearing on Tuesday grew tense as chairwoman Rep. Maxine Waters sparred with Treasury Secretary Steve Mnuchin, who was there to testify about several issues, including whether or not his department would release President Trump's tax returns. During the back and forth, Mnuchin said that he wanted to leave the hearing to attend a meeting with a foreign leader, but also begrudgingly offered to stay, according to video footage that circulated after the hearing. However, when Waters took him up on his proposal, the treasury secretary balked.

The fiery exchange began after Waters told Mnuchin that other secretaries did not ask the committee to limit their hearing time on such short notice.

"If you’d wish to keep me here so that I don’t have my important meeting and continue to grill me then we can do that," Mnuchin responded. "I will cancel my meeting and I will not be back here. I'll be very clear, if that’s the way you’d like to have this relationship."

Instead of acknowledging Mnuchin's threat, Waters took him up on his offer, and instructed him to cancel his meeting so that other committee members might have their turn to speak.

"Thank you," Waters responded. "The gentleman — the secretary — has agreed to stay to hear all the rest of the members. Please cancel your meeting and respect our time."

Mnuchin spoke over Waters for a beat before contending that she was "instructing" him to stay put.

"No, you just made me an offer," Waters said.

Mnuchin said that he did not, and accused Waters of "ordering" him to stay at the hearing.

Mnuchin then said that he did not want that. Waters confirmed that he was allowed to leave whenever he wanted.

"Please dismiss everybody," Mnuchin responded. "I believe you’re supposed to take the gavel and bang it."

Waters did not appear to appreciate his request that she formally close the hearing. She interjected, quickly.

"Please do not instruct me on how I am to conduct this committee," Waters said.

The interactions between Mnuchin and Waters grew tense at several moments during the hearing, according to reports. Per The Hill, Mnuchin remarked at one point that Republicans "did not treat the secretary of the Treasury this way."

"This is a new way and it’s a new day," Waters said. "And it’s a new chair and I have the gavel at this point."

Per Business Insider, Mnuchin ultimately stayed at the hearing until 5:30 p.m., having originally planned to leave at 5:15 p.m. The Financial Services Committee hearing was the second House hearing that Mnuchin participated in on Tuesday, according to The Washington Post.

Tuesday was not the first time that Waters and Mnuchin engaged in a fiery back and forth. Famously, in 2017, Waters coined the phrase "reclaiming my time" during a separate hearing with the secretary. Then, as now, their exchange went viral.