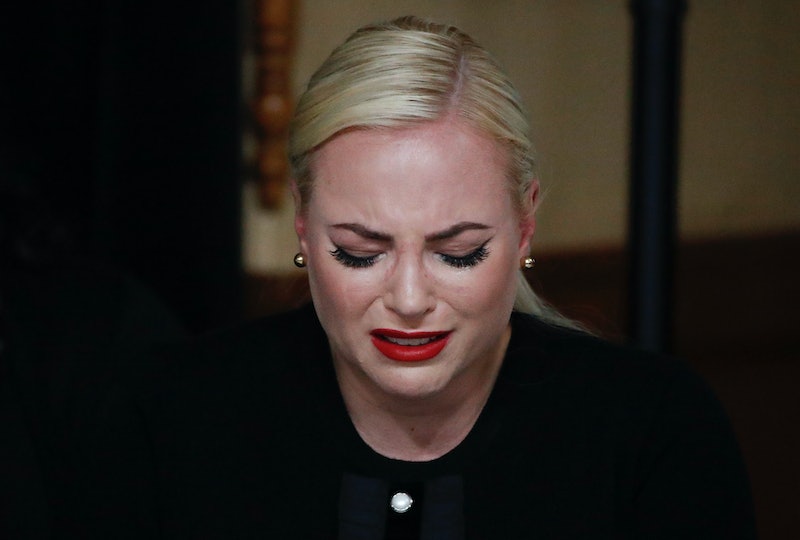 Former presidents, powerful political figures, and family gathered Saturday at the Washington National Cathedral to honor Sen. John McCain. Among those planned to eulogize McCain were President Barack Obama, Sen. Lindsay Graham, and his daughter Meghan McCain. On Saturday morning, video of Meghan McCain's emotional eulogy for her father went viral, in part because of how she wore her grief on her sleeve, often breaking down while communicating just how much she loves him.

Then, in what many thought was a subtle call-out of President Donald Trump, Meghan said:

We gather here to mourn the passing of American greatness. The real thing, not cheap rhetoric from men who will never come near the sacrifice he gave so willingly, nor the opportunistic appropriation of those who lived lives of comfort and privilege.

And, in another fiery line, she said, “My father wasn't an opportunistic man of wealth who sat back while others make their sacrifices," according to Roll Call.

At one point, the Cathedral was filled with long applause when Meghan said, in what appeared to be a reference to President Trump's "Make America Great Again" campaign slogan, "The America of John McCain has no need to be made great again because America was always great." New Yorker staff writer Susan Glasser noted that the moment was extraordinary for funerals of this nature. She wrote on Twitter:

Make no mistake: the applause ringing out at the Cathedral when Meghan McCain says 'America has no need to be made great again because America was always great' is not standard. Never heard applause at a funeral here before.

Meghan also shared touching memories of the McCain she knew as her father, according to full transcript of her eulogy by Town & Country:

Imagine the warrior the night of the skies gently carrying his little girl to bed. Imagine the dashing aviator who took his aircraft, hurdling off pitching decks in the South China Seas, kissing the hurt when I fell and skinned my knee. Imagine the distinguished states man who counseled presidents singing with his girl in oak creek during a rainstorm to singing in the rain. Imagine the senator fierce conscience of the nation's best self taking his 14-year-old daughter out of school because he believed I would learn more about America at the town halls he held across the country. Imagine the loyal veteran with his eyes shining with happiness as he gave blessing for his grown daughter's marriage.

You all have to imagine that. I don't have to because I lived it all. I know who he was. I know what defined him. I got to see it every single day of my blessed life.

Earlier in the day, the McCain family visited McCain's casket as it laid at the Arizona State Capitol in Phoenix, where Meghan openly wept over her father, People reported.

Twitter was full of people championing Meghan's strength when she called out Trump without saying his name, while others just recognized her pain as a daughter who lost a father. If her speech proved anything, though, it was that Meghan loved her father fiercely.