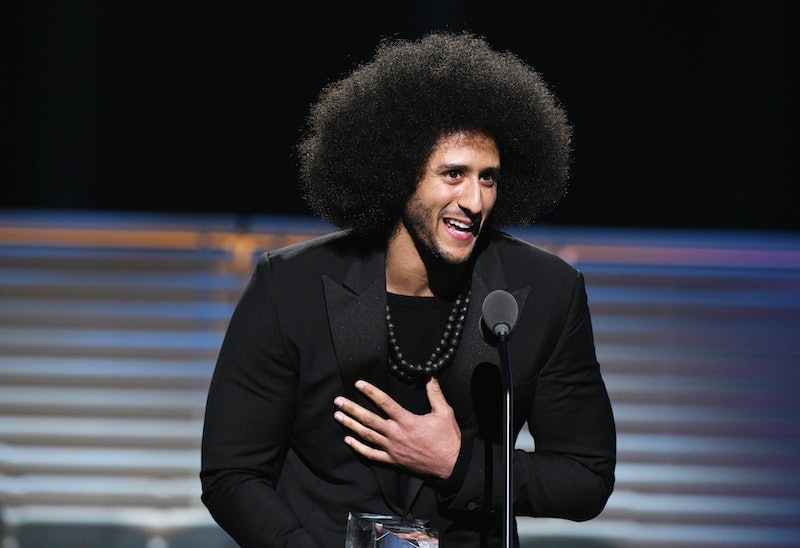 It's a video with passionate narration that may just move some to tears. On Wednesday, Nike released a commercial narrated by Colin Kaepernick, just days after the brand announced it was collaborating with Kaepernick for its 30th "Just Do It" anniversary. The two-minute-long video focuses on encouraging people to dream without fear.

"If people say your dreams are crazy," Kaepernick can be heard saying in the background, "if they laugh at what you think you can do, good. Stay that way. Because what nonbelievers fail to understand is that calling a dream crazy is not an insult. It's a compliment. Don't try to be the fastest runner in your school or the fastest in the world. Be the fastest ever." You can see professional runner Eliud Kipchoge joined by others at this point.

The video features big names from the world of sports, including LeBron James and Serena Williams. And football gets a mention, too. The former San Francisco 49ers quarterback said, "Don't picture yourself wearing [Odell Beckham Jr.'s] jersey. Picture OBJ wearing yours. Don't settle for homecoming queen or linebacker — do both." Here, Alicia Woollcott of the Grand Blanc football team and Charlie Jabaley can be seen.

Additionally, Kaepernick adds, "If you're born a refugee, don't let it stop you from playing soccer for the national team at age 16." On the screen, a jubilant 16-year-old Alphonso Davies of the Canada's Vancouver Whitecaps FC soccer team can be seen running across the field as his teammates cheer for him.

In other parts of the Nike commercial, you can see James speak about his public school for at-risk children in Ohio in July, Williams at various tennis matches, NFL player Shaquem Griffin torpedoing through the football field, plus others.

Nike's new commercial has found many fans, but there are some who have expressed anger at the collaboration between the company and Kaepernick. Nike unveiled its ad campaign featuring Kaepernick on Monday, with the words "Believe in something, even if it means sacrificing everything" emblazoned across his face. In response, many conservatives went as far as to set their Nike shoes and apparel on fire. But the company continues to stand by Kaepernick who garnered national attention in 2016 with his protest against police brutality by kneeling during the national anthem.

In 2016, Kaepernick told NFL Media, "I am not going to stand up to show pride in a flag for a country that oppresses black people and people of color." His former team, San Francisco 49ers, issued a statement saying, "In respecting American principles as freedom of religion and freedom of expression, we recognize the right of an individual to choose and participate, or not, in our celebration of the national anthem."

In 2017, Donald Trump indirectly referred to Kaepernick as a "son of a b*tch" for his protests. But after Nike announced its partnership with Kaepernick, Trump gave an uncharacteristically tepid response on Tuesday, calling the collaboration a "terrible message, but added that Nike's power to decide for its business "is what this country is all about."

On Wednesday, however, Trump took on a more aggressive tone, claiming that Nike and the NFL were apparently "absolutely getting killed with anger and boycotts."

While critics have taken issue with his protest, Kaepernick's ad with Nike is bound to inspire many. It's the message of going past limitations and setbacks that will most likely resonate with viewers.

After all, at the end of the Nike ad, Kaepernick tells his audience, "Don't ask if your dream is crazy. Ask if it's crazy enough."