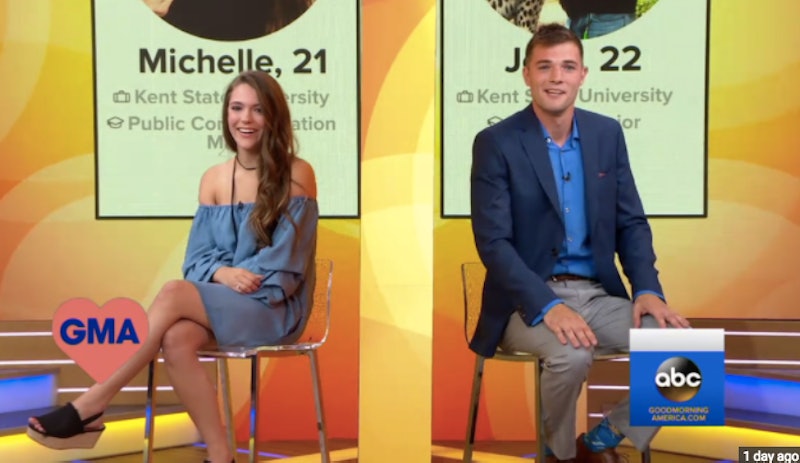 What's more awkward than having your very first date in Hawaii, knowing that the Internet is eagerly waiting for the news of your impending nuptials? Meeting for the first time on live television, knowing that the Internet and morning show viewers are tuning in. That's the situation the Tinder couple who went viral for their years-long banter found themselves in this week when they finally met in person on Good Morning America. There's nothing more romantic than a live studio audience, amiright?

Earlier this month, the story of Josh Avsec and Michelle Arendas, two students at Kent State University, caught the fickle attention of the Internet when Avsec tweeted screenshots of their message history. They first matched in 2014, and what followed was a series of creative apologies for avoiding each other. At first glance, the conversation is unremarkable, if clever, but there's a catch. The messages were sent months apart over the course of three years.

Finally, in early July, Avsec posted their messages to Twitter, writing that one day, he would meet Arendas and it would be, in a word, "epic." His tweet went viral, eventually catching the attention of the Tinder gods — er, employees — themselves, who offered to send the students to Maui for their first date.

But first, the couple had to actually meet — which they finally did this week. On Tuesday, after three years of flirting via text, Avsec and Arendas saw each other face to face on the Good Morning America set. Avsec was understandably excited, telling ABC News, "My butterflies have had butterflies. I have been imploding since I arrived in New York."

After they came face-to-face on stage, he said, "This is a dream come true. I can’t believe I’m seeing her right now." That sound you heard was my heart melting into a puddle of goo.

Obviously, there was a little awkwardness, but they seemed to get along just fine. Arendas told ABC that their ultra-modern love story has been a "crazy adventure so far."

Now all that's left is for the couple to set off for Maui, where they'll get to know each other better at last. No pressure or anything.