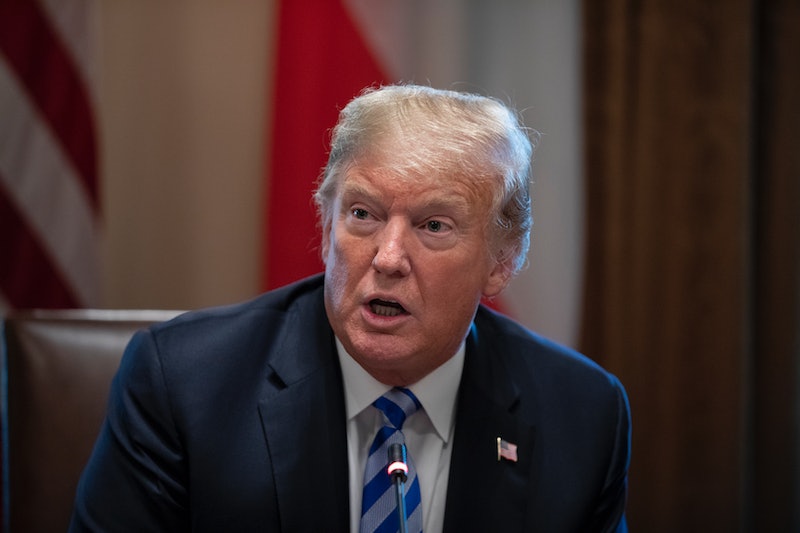 President Trump is fervently denying new reports that he referred to Jeff Sessions, his own attorney general, as "retarded." The report surfaced in excerpts of Bob Woodward's new book, and Trump quickly insisted on Twitter that he's "never used" the term on anybody. Two days later, multiple video clips surfaced of Trump on The Howard Stern Show using the word and its derivatives in reference to people he doesn't like.

In the early-20th century, the word in question was a clinically-accepted term for for people with developmental disabilities. By the mid-20th century, however, many had started using the term as a casual insult to mean "stupid." Over time, this usage came to be seen as offensive and disrespectful to those with intellectual disabilities, and the term gradually fell out of favor as both a slang word and a medical term.

In his new book Fear, Woodward reports that Trump referred to Sessions as "mentally retarded" and "a dumb Southerner." Trump pushed back on Twitter, claiming that he "said NEITHER, never used those terms on anyone, including Jeff." However, easily-obtained audio clips of Trump's past interviews reveal that he has in fact used the offensive term and its variations multiple times in reference to multiple people.

The video below features Trump using a term that many consider offensive and unacceptable.

"I was criticized in one magazine, where the writer was retarded," Trump said in an appearance on Howard Stern's show in April 2004.

"I have a golf pro who's mentally retard — I mean, he's really like, not a smart guy," Trump said on Stern's show several months later. Both clips are readily available on the internet.

In addition to those two pieces of video evidence, Trump is also reported to have used the term in reference to Marlee Matlin, the deaf actress who once competed on The Celebrity Apprentice. Three sources told the Daily Beast that Trump would regularly use the word in reference to Matlin, who's currently the only deaf person to win the Academy Award for Best Actor or Actress.

Trump has a history of disrespecting people with disabilities. In 2016, he mocked the physical mannerisms of Serge Kovaleski, a reporter with a joint condition who'd written critically of him, during a campaign speech. Two years later, he said it was "a little tough to watch too much" of the Paralympics, but that he nevertheless "watched as much as I could."

Though Trump denies insulting Sessions on the grounds of his intelligence or geographic roots, he's been highly and regularly critical of his performance as attorney general.

In August, Trump said that Sessions "doesn’t understand what is happening underneath his command position." On Monday, the president condemned him for bringing charges against Republican congressmen before the midterm elections, the implication being that the Attorney General shouldn't take actions that might harm the Republican Party's electoral prospects.

Trump has also repeatedly criticized Sessions for recusing himself from the Russia investigation, telling reporters in April that he wouldn't have appointed Sessions to lead the Justice Department if he'd known he was going to recuse himself.