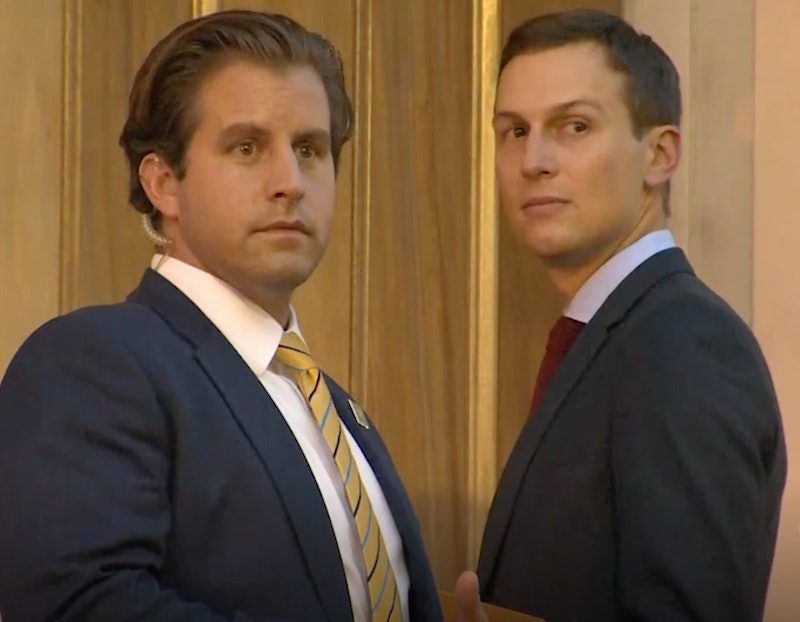 It's an intense week in D.C., what with Brett Kavanaugh's hearings, a bombshell op-ed from a Trump administration official, and NAFTA renegotiations. But as always, social media users have found a way to lighten the mood. On Thursday, Twitter pounced on a video of Jared Kushner stuck outside a door and turned it into a viral meme.

According to the Huffington Post, the video shows him arriving at the Office of the United States Trade Representative (USTR) for NAFTA talks. Followed by reporters shouting questions, Kushner walks up to the building and seems to try the door — which doesn't open — and then ring a bell or buzzer. No response comes, and he begins to look uncomfortable as the seconds tick by and he and his bodyguard wait for the door to open. After nearly two minutes, he gets on his phone, apparently to call someone inside, after which he's finally let in.

CBC reporter Katie Simpson, one of the first people to share the video, wrote that the moment was "awkward since it takes security 2 mins to let him in."

Twitter thought it was hilarious and turned it into a meme on Thursday. As the video spread, one user even dubbed it with the credits music for Veep, which sometimes shows politicians making gaffes while the credits roll.

Some users had other ideas about what show it reminded them of: "I swear it's like a SNL skit!!" one user tweeted, while another wrote, "I reckon it has more of the awkwardness of The Office."

One brought up the fact that it was "reminiscent" of a 2005 incident in which President George W. Bush tried unsuccessfully to open a door as he left a press conference. "I was trying to escape. It didn't work," he joked.

Kushner is helping the president renegotiate NAFTA this month, and he's one of just a few people who "have full visibility" of the talks, according to Axios. One official told The Washington Examiner that Kushner has been working on issues related to NAFTA since Trump entered office and that he's aided by having a close relationship with Mexico.

Trump announced on Aug. 27 that the United States and Mexico had come to an agreement about the most important sections of NAFTA. Kushner stood behind the president when he made the announcement, calling the moment "a big day for our country."

It's unlikely that a final deal will be reached this week, according to Bloomberg. That Aug. 27 agreement didn't include Canada; the United States and its northern neighbor are now working resolve outstanding issues before they agree to a deal. "One of the things that is true of any trade agreement is nothing is done until everything is done," Canadian Foreign Minister Chrystia Freeland said on Thursday, per Bloomberg. "A trade agreement is about all the pieces coming together."

CTV News reported that the negotiations lasted late into the night on Thursday and that they will continue on Friday. Kushner will presumably be there, as long as he can get in the door.