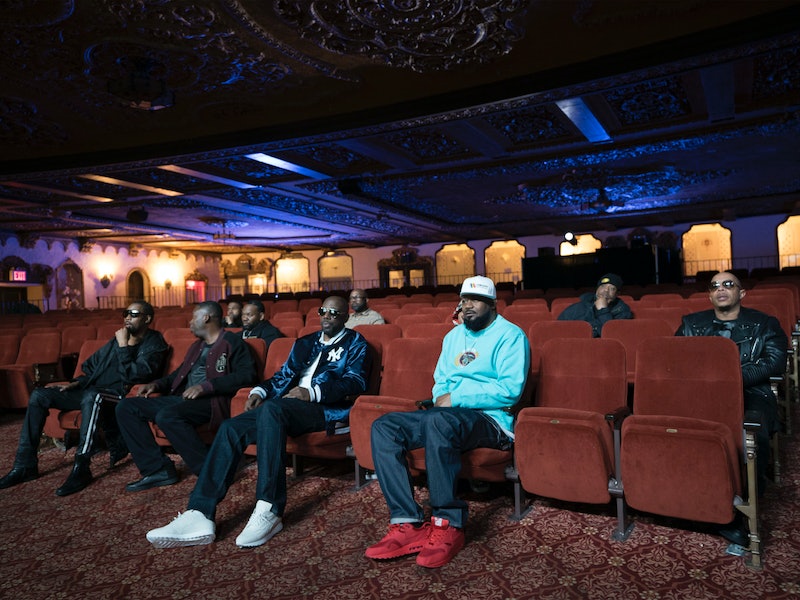 They're the stuff of hip-hop legends now, but the Showtime docu-series Of Mics And Men shows that the Wu-Tang Clan's journey to the top was long and hard-fought. The four-part series tracks the group's trajectory from Staten Island to the 1993 release of Enter the Wu-Tang (36 Chambers), the ensuing superstardom and beyond. The series collects archival footage to tell the story of the Wu-Tang, but no footage captures what was so inspiring about the group's early years than videos of old Wu-Tang Clan performances.

The Wu-Tang Clan of the mid-'90s were a much different group than the Wu-Tang Clan that performed on Good Morning, America! in late 2018. Whether the performance was televised or solely for the crowd in front of them, Wu-Tang shows had the benefit of having a plethora of energies and personalities on stage, resulting in an air of unpredictability in which the members of the Clan trade off verse after verse with the greatest of ease. Seriously, watching them perform together is mesmerizing.

The RZA, The GZA, Method Man, Raekwon, Ghostface Killah, Inspectah Deck, U-God, and Masta Killa all played their part, but the videos of their '90s performances shows that Ol' Dirty Bastard was often the heart of their live shows, ramping up the crowd and bringing da ruckus in a way no one else could. While the Wu-Tang Clan still tours today, doing shows in venues that may have seemed unimaginable in 1993 such as the Sydney Opera House, there's nothing quite like seeing the crew perform during their mid-90's ascent.

The Clan's performance of "C.R.E.A.M." on Live With Arsenio Hill is featured in Of Mics & Men, marking a watershed moment for the up-and-coming group and it's clear to see just why this performance was such a personal moment.

While not a live performance, the official video for "C.R.E.A.M." and studio recording is a total classic.

This live video shows a crucial aspect of why Wu-Tang Clan became so enduringly popular — their personalities, as well as their skills. This clip features two minutes of Ol' Dirty Bastard speaking to the audience, talking about race and insisting that anyone who wished to fight him was firmly misinformed about who they were dealing with.

In the lead up to their 20th anniversary (and all the waiting for an album and a tour that came with it) the group took the stage at the iconic New York City music festival in 2013, albeit without ODB, who died in 2004..

In 2013, Method Man famously walked off the Rock The Bells stage after sound issues. And then they used a hologram to resurrect Ol' Dirty Bastard, which was ill conceived at best.

This medley of cuts from the group's sophomore effort, Wu-Tang Forever, from the late night showVibe allows each of the Clan's members a moment on the mic and shows how electrifying it can be when the entire group is firing off rhymes as a collective unit.

Long before the Wu-Tang Clan was selling records to Martin Shkreli or preaching the virtues of diversifying one's bonds, they were hip-hop's most memorable live acts, and while the legacy of their studio output lives on, today's fans will unfortunately never know to impact of seeing Wu-Tang live in their cultural prime.

More like this
The 'Andor' Timeline, Explained
By Gretchen Smail
A Former 'Strictly Come Dancing' Pro Permanently Joins 'It Takes Two' Spin-Off
By El Hunt and Sam Ramsden
How Much Are The 'Schitt’s Creek' Stars Worth?
By Hugh McIntyre
The ‘Kevin Can F**k Himself’ Season 2 Finale Twist Is A Full Circle Moment
By Grace Wehniainen
Get Even More From Bustle — Sign Up For The Newsletter