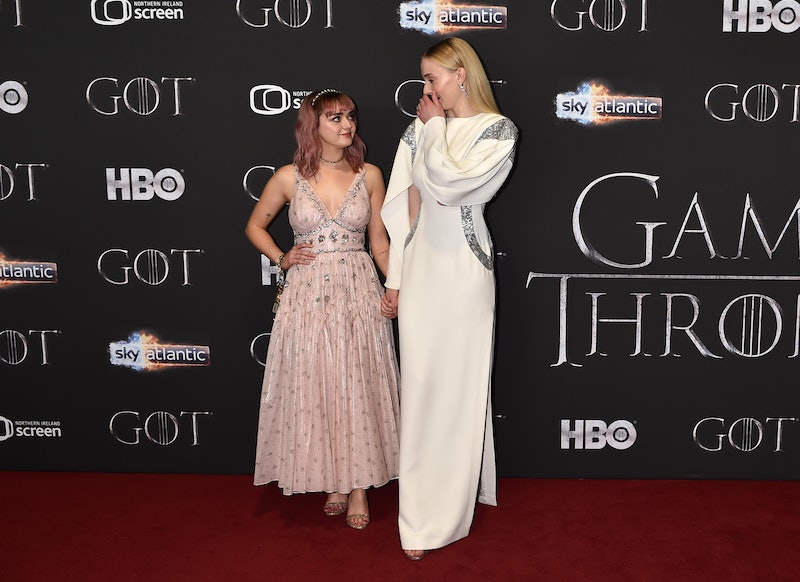 If you're waking up today and in need of some great news, here it is. Sophie Turner and Joe Jonas finally wed in a surprise ceremony in Las Vegas on Wednesday, May 1, after a night at the Billboard Music Awards. The ceremony, which was live-streamed by Diplo, seemed like a blast and definitely very on brand (spontaneous, fun, hilarious, etc.). But the biggest question remains: was Maisie Williams at Sophie Turner and Joe Jonas' wedding, since it seemed so last minute? Based on Diplo's admittedly blurry footage and any photos fans have seen thus far, it doesn't look like Williams was in attendance.

The wedding took place in Las Vegas right after the BBMAs, where Joe Jonas performed with the Jonas Brothers. In videos on Instagram, the two were seen getting married in a chapel with an Elvis look-alike as the officiant. A rep from Turner gave a statement to Bustle confirming that they were married last night. Based on the video, it looks like Diplo, Khalid, and, of course, Nick Jonas and Kevin Jonas were all in attendance, but other attendees were somewhat difficult to recognize.

With all the hoopla aside, it unfortunately looks like Williams, Turner's best friend and supposed maid-of-honor, was nowhere to be seen at the ceremony. Instead, MailOnline reported that Priyanka Chopra was in that position at the Vegas wedding. Turner herself confirmed back in early April that Williams would be one of two maids-of-honor, making her absence surprising, to say the least.

When speaking to Entertainment Tonight in April, Turner teased that she and Williams were figuring out what her on-screen sister would wear to her wedding, confirming her head position in her bridal party. "I don't know why she's thinking about [what she's wearing to my wedding]. I'm giving her the bridesmaid dress!" she said. "She's my maid of honor! One of two." The Sun also reported previously that Turner and Jonas were planning a four-day wedding event that would be held Glastonbury weekend this summer in France.

The report stated that their family, friends, and Turner's Game of Thrones co-stars would all be there. Considering it looked like neither of their parents nor Williams were at this Vegas wedding, they might still follow through with this bigger ceremony as well. Turner did say Williams was "one of two" maids-of-honor, so it's plausible that this was planned all along, with Chopra always her lead bridesmaid in the American ceremony, and Williams in her wedding abroad.

Regardless, since there was no official explanation, fans of Sophie Turner and Maisie Williams — Mophie, as they've endearingly taken on — were a little annoyed and confused at Williams not being there. There were a lot of feelings on the matter, since they're both very well known as iconic best friends.

Luckily for Williams, there were plenty of people resent at the ceremony who took photos, and, in Diplo's case, even live streamed the wedding. Khalid was also there, along with Dan + Shay. The latter performed their song "Speechless" as Turner and Jonas reportedly exchanged candied rings. And, of course, the other two-thirds of the JoBros were also there along with their spouses, Chopra and Danielle Jonas.

Since the two haven't come out with any more info on the why and the how of their Las Vegas wedding, it's hard to say whether or not it was planned. That said, it's very them to have a wacky Vegas wedding after a major music awards show that Joe performed at, and they seemed to have a blast. Jonas has said in the past that their wedding would be a blend of their cultures — American and British — so maybe this was the American portion. Because what says red, white, and blue better than having Elvis wed you in Sin City? Nothing.

More like this
20 Years Later, Kelly Clarkson & 'American Idol' Judges Reunite For Her Hollywood Walk Of Fame Star
By Radhika Menon
Alicent's Green Dress In 'House Of The Dragon' May Be An Act Of War
By Kadin Burnett
'School Of Rock' Changed Joe Keery's Life Forever
By Alyssa Lapid
Netflix Reveals First Look At Wednesday In The 'Addams Family' Spinoff Series
By Bustle Editors
Get Even More From Bustle — Sign Up For The Newsletter