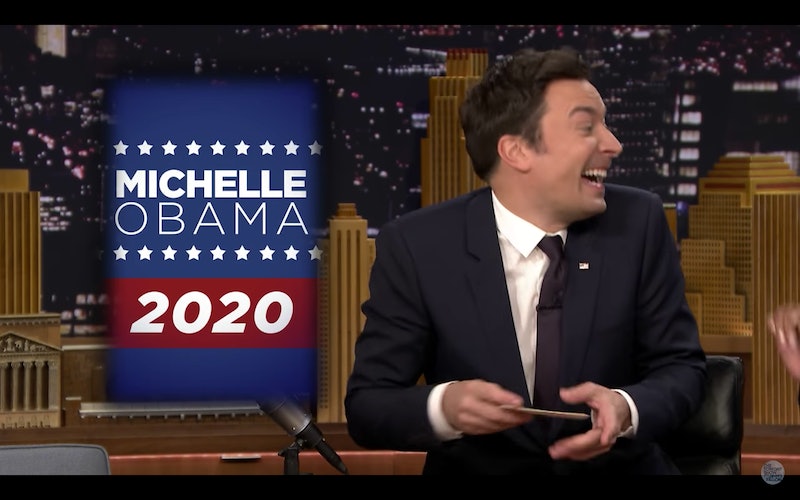 Jimmy Fallon and Michelle Obama covered a lot of ground when she appeared on The Tonight Show Wednesday. Everything from her emotions about leaving the White House to why Sasha wasn't at the president's farewell address (with a final in the morning, she had to hit the books). But it wasn't just a straight interview; Obama filled the entire episode and Fallon had a few fun segments set up. No mom dancing this time, but Fallon did ask Michelle Obama to run for president in a pretty creative way.

It was while the two were writing thank you notes. To get things started, Obama wrote one to her husband: "Thank you, Barack, for proving you’re not a lame duck but my very own silver fox.” That's pretty good, but Fallon had more for the first lady herself. "Thank you, first lady Michelle Obama, for bringing a whole new meaning to the phrase, 'the right to bare arms,'" he quipped, clearly tying to butter her up with a compliment.

That wasn't it though. His second thank you note was more of the same. "Thank you, Mrs. Obama," Fallon continued, "for being a strong, smart, independent woman — an activist, a style icon and a great dancer, and showing us all what it would look like if Beyoncé married a much nerdier Jay Z." With the flattery out of the way he went in for the ask:

Thank you Mrs. Obama for always promoting physical fitness. And, hey, since you like exercise so much, how about running for president?

If you were holding your breath that she finally said "yes" to Fallon, I hate to disappoint you. One of the first lady's other thank you notes gives you an idea of how she feels about the possibility: "Thank you, Inauguration Day, or as I like to call it, 'Let's Move!'" Obama said to the camera, as the logo for her healthy kids initiative flashed onscreen. This matches with her past statements. She told Oprah last month that she's not coy, isn't playing games, and has absolutely no interest in being president.

But if we're taking her jokes as an answer, there is the smallest possibility thanks to what her final thank you said. With perfect comedic timing Obama read out loud as she penned, "Thank you, my initiative Reach Higher, for encouraging every student in America to get a college education after high school, which is also known as, 'four more years!'" The studio audience nearly broke out into a chant of "four more years" before being hushed by the first lady, which made clear that this was just a joke.

So even though Fallon may have a cute and creative way of asking, the answer is still no. So get ready for Michelle to join the ranks of private citizens; we'll be lucky to have her among us.