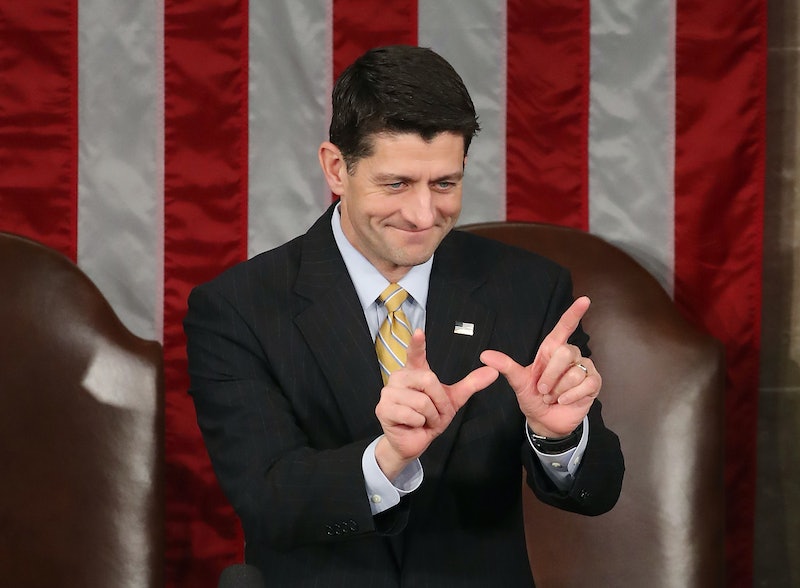 You know the news cycle is strange when Paul Ryan has been connected with a viral dance move twice, and that's far from the most absurd thing that anyone's heard recently. Yes, Ryan "dabbed" during his town hall session, telling the public that he did in fact know what it meant to dab. This was of course in response to the story surrounding the Kansas congressman's son who dabbed at his father's swearing in. In that instance, Ryan appeared to be the ultimate dad, thinking that the teen was sneezing instead of dabbing. Looking confused while posing for the photo, Ryan forced the son to put his arm down and, well, act normal for the camera.

Aside from the whole trying to repeal Obamacare and defund Planned Parenthood thing, it seems as though Ryan has at least learned something valuable about pop culture over the past several days. Less than two weeks ago following the photo-op with the new Kansas congressman, the house speaker cluelessly tweeted that he "[didn't] get what dabbing is". Now, that's apparently changed.

Just watch this video of Ryan performing the move on national television to prove he knows how to dab. He then went on to joke that he even has better technique than the Kansas congressman's son.

The dabbing thing was cute and all, but pretending that you have a grasp on this particular part of the culture isn't really fooling anyone, Speaker Ryan. More importantly, though, it doesn't distract anyone from the real matter at hand — the rushed Republican repeal of the Affordable Care Act. With even many Republican congresspeople getting skittish about a repeal without a concrete replacement in place, Speaker Ryan has firmly stated that they would "do this the right way". What he has not done, of course, is specify in any way what they're actually going to do, or how they're going to do it.

You can rest easy, though, knowing that he has taken the time to educate himself on how to dab, and that he even knows that Cam Newton is one of the people who popularized it. You're not a regular dad, Speaker Ryan. You're a cool dad. Thanks for the laugh, and now I think that I don't speak only for myself when I say that I'm more interested in seeing how you're going to guarantee health coverage for as many Americans as possible.