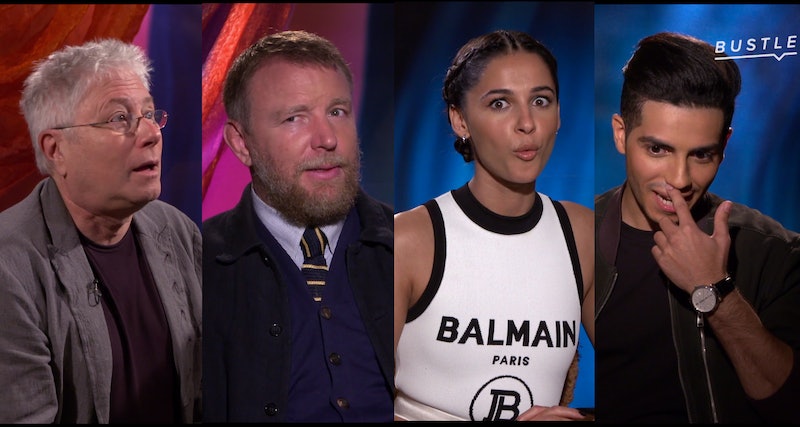 How well do you know your Disney movies? Do you think you'd be able to hold your own in a trivia game, or get flustered even if you know your stuff? At the Los Angeles press junket, Bustle Entertainment Writer Sydney Bucksbaum sat down with the cast of Disney's new live-action remake of Aladdin, out May 24, to quiz them on Disney trivia. Mena Massoud (Aladdin himself), Naomi Scott (Jasmine), director Guy Ritchie, and composer Alan Menken all gamely answered questions about Disney classics — and it's pretty clear the Aladdin crew have one particular trivia category that they're really great at.

Considering how popular its been from its release to present day, it's hard to believe the original animated film came out in 1992 — that's 27 years ago! Menken is the only person in the quiz seat to have worked on the original. In addition to composing the score of the original Aladdin, he's worked on hits like Pocahontas, Hercules, and even won a Best Score Oscar for The Little Mermaid's "Under The Sea." Basically, he orchestrated your childhood.

Bucksbaum quizzes the new crew on OG Aladdin basics, like "What was the name of Jasmine's pet tiger?" and "What does Abu try to steal from the Cave Of Wonders?" She also throws in a few trickier questions, like "What was Aladdin's second wish?" And if you think that's easy — he wished to be a prince! Nope. Aladdin's first wish is to be a prince; he tricks Genie into getting him out of the Cave of Wonders without using a wish.

Speaking of, two of Massoud's wishes came true when he landed the role of Aladdin. In a Cineworld interview, Massoud explained why Aladdin meant so much to him, and why he's grateful to be a part of it. "Growing up I didn't see a lot of people that looked like me on screen, and I had to struggle for a long time, so what Disney's been able to do with this, and really cast authentically...I'm just proud little kids can watch this and be inspired," he said.

So Aladdin is pretty much a gimme for this cast, but when the game switches over to The Little Mermaid trivia, they're a lot less confident. The first question out of the gate, "What was the name of Ariel's underwater kingdom?" trips everyone up. The answer is Atlantica, but to be fair, the name never came up in the original movie — according to Disney Fandom, the name was coined for a 1993 novelization of the film and was stuck with for all cartoons, sequels, and comics moving forward.

But just because they struggled a bit with those questions doesn't mean that the Aladdin stars weren't also paying attention to the rest of the Disney canon when they were growing up. Speaking to The Independent, Scott talked about how all the '90s Disney princesses helped her realize the limitations placed on women, as each one exceeded them. Of Jasmine in particular, she says, "She was my favorite Disney princess and she made me feel empowered. She spoke up, she wanted to fight for the choice to marry. But in our movie, she’s way more active ... Yeah, she’s sassy, but what’s more important is that she’s actually fighting for the freedom of choice for her people. That’s feminism, it’s not just a witty comment.”

The new Aladdin modernizes the story without altering what people already love about it. And considering how well the team knows the original, its legacy was definitely on top of mind as they made their version.