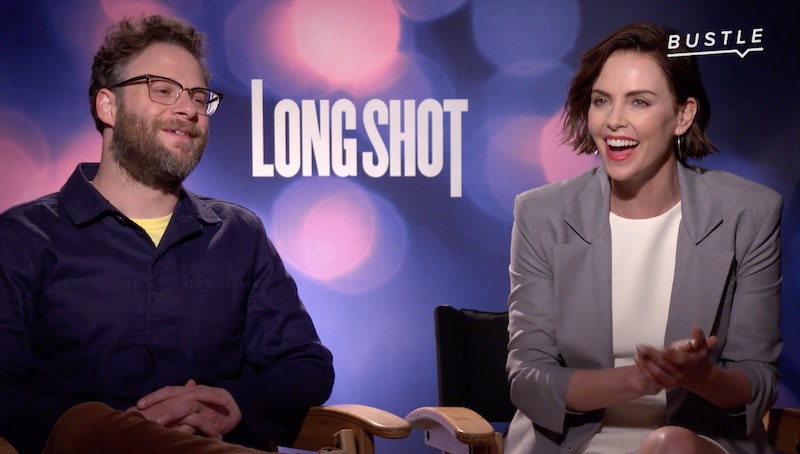 Charlize Theron and Seth Rogen's new rom-com Long Shot (in theaters May 3) is the unlikely — yet also very realistic and relatable — love story of two extremely different people who still somehow click. It involves a childhood crush, a lot of partying, and a presidential race, which lights a spark between candidate Charlotte Field (Theron) and journalist-turned-speechwriter Fred Flarsky (Rogen). At the movie's Los Angeles press junket, Bustle's Associate Entertainment Editor Mallory Carra decided to put the film's stars and director Jonathan Levine to the test to improve on some of the greatest speeches in history — both real and fictional.

Long before Fred was writing speeches for Charlotte's campaign, she was his babysitter, and also his very first crush. When the two reunite at a party, Flarsky — despite his clumsiness and awkwardness — somehow manages to charm Field and even impress her. She decides to hire him onto her presidential campaign, and sparks fly as they get to know one another in the process — not to mention the near-death experience. But the unlikeliness of their pairing, in the eyes of the public and the eyes of Field's staff, seems to be getting in the way. In the trailer, Fred's friend Lance (O'Shea Jackson Jr.) describes it as a "reverse Pretty Woman" situation.

We don't know yet whether Fred and Charlotte are going to make it work — though, let's be real, it's a rom-com, so they probably will. But we do know that there's nothing like a great speech to command attention, loyalty, and even some laughs. With this idea in mind, Bustle prompted the cast — Theron, Rogen, O'Shea, June Diane Raphael, and director Levine — to come up with their own takes on some of the most famous orations ever, and the results were all over the place.

The first famous speech up for the editing is Eleanor Roosevelt's famous quote, "The only thing we have to fear is fear itself." With his answer, Rogen reveals that he's not too fond of spiders. Meanwhile, Jackson Jr. only has the Los Angeles Lakers on his mind.

"Ask not what your country can do for you," from John F. Kennedy's 1961 inaugural address, makes Theron wonder how much ice cream it's possible to eat in one sitting. Rogen's answer? "Probably three pints."

While they're willing to put their spin on a lot of iconic words, when it comes to some truly legendary speeches — like Martin Luther King Jr.'s "I Have A Dream" — none of the cast dare to change them at all. And Rogen also refuses to change a word of that stirring presidential Independence Day speech, which he completes from memory. "It's the greatest movie of all time," Rogen says. "I would sooner paint over the Mona Lisa than I would rewrite the end of Bill Pullman's Independence Day speech."

Their answers may make you wish that the Long Shot cast could have been there throughout history to put a little polish on some key moments. For now, this video and their uproarious new comedy will have to do.

More like this
On 'The Handmaid’s Tale,' Christine Ko Fights Back
By Gretchen Smail
Lin-Manuel Miranda & Tituss Burgess React To 'Little Mermaid' Casting Backlash
By Radhika Menon
An Extremely Messy Ranking Of What Actually Happens In 'Don't Worry Darling'
By Chloe Foussianes
Paul Mescal, Man Of Mystery
By Samantha Leach and Heather Hazzan
Get Even More From Bustle — Sign Up For The Newsletter